You are here: Home>places>Townlands>Allens Park 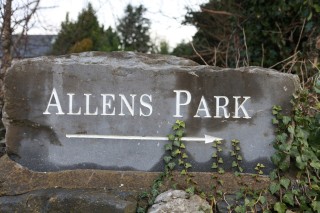 Allens Park used to be part of Leagaun townland.  A landlord or farmer by the name of Allen came to live in the area a couple of hundred years ago. The townland is sometimes known as Áit Tí Mhocháin in Irish.

This is one of the smaller townlands situated between Leagaun (Liagán) and Ballydotia (Baile Dóite). At one stage, it belonged to a family called Comer, who emigrated to New Zealand having sold their farm. It was bought by the Connollys. Clancy’s farm was later acquired by the O’Toole family. The earlier history of Allens Park has unfortunately not been recorded.  A fine example of a souterrain was once situated in this area.

There are many interesting questions yet unanswered concerning the Comer family, such as their origins, where they sourced their wealth, from whom they acquired the land and their date of arrival in Moycullen. They also owned land at Curra.

Thanks to James Connolly, Allen’s Park, the following records have been made available:-

Julia Comer was baptised in April 1878 and she married Mark Concannon from Knockranny, and they also emigrated. There is anecdotal evidence that other female members of the Comer family married into Moycullen families.

The Clancy family appear to have lived in Allens park since the early 19th Century. A slate sundial face carved by John Clancy and signed in 1841 is some proof of that.

There was no data in the Blake Census for this townland. This townland might have been included in the townland of Leagaun.

There was no census data for this townland. This townland might have been included in the townland of Leagaun.