The history of Galway men serving in the British forces is somewhat of an untold story, despite being a subject right at the heart of ‘our own’ history in the nineteenth century. The long reign of Queen Victoria had seen a boom in industrialisation and the expansion of the British Empire across the globe.  While the rest of the United Kingdom boasted industries and dockyards to occupy adult men, Ireland’s poorer agrarian society had few such options. It was unsurprising, therefore, that Ireland would prove to be such a fruitful source of war recruits 1.  The following is a study of 26 such recruits, all from Moycullen, in the half-century from 1810-1860.

As can be seen, the average age at attestation was just over 19 years and this is somewhat lower than similar studies in the north and east of the county2. The average age at discharge (‘Exit’) is markedly lower, however, at under 30 years3. The men were exclusively labourers prior to attestation (‘Enlisted’), with only variations of same ever listed e.g. Finerty and Gavin list themselves as having been ‘Grooms’ prior to enlistment4.  The fact that four of the men completed the maximum 21 years of service, with one even exceeding that, is both impressive and unusual.

During the early part of the century enlisting could mean joining ‘for life’, sometimes cut short at the end of a French weapon or by disease or disability. The first of the listed soldiers is Private John Lee of the 88th Regiment of Foot (later the Connaught Rangers), one of as many as 160,000 Irishmen to ‘attest’ in the twenty years to 1815.  Lee enlisted in 1812, aged 18, and served for two and a half years before being invalided at the Battle of Orthez on February 27th 18145.  That battle was fought as the Peninsular War was coming to an end, with a British-Portuguese force soundly defeating the French.  Lee suffered a gun-shot wound to the leg leaving him permanently invalided.

Patrick Sullivan gets promotion to Sergeant for service in India, Pakistan and Afghanistan. 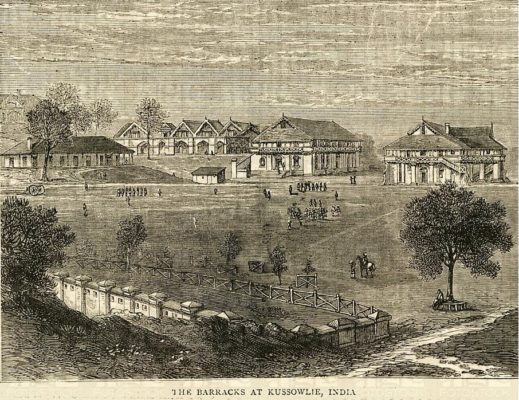 While eight of the listed men are noted as having served in the East Indies in their ‘notable service’, in fact others like Patrick Sullivan also served there in his eighteen years abroad – in his case with distinction in modern India (Kanpur) and Pakistan (Sukkur). His bravery in Afghanistan too is worthy of mention, notably in engagements at Kabul and Jalalabad during 1841 and 1842. Having been court-martial-ed and even imprisoned earlier in his career, Sullivan proved his worth time and again before eventual promotion to Corporal and Sergeant – quite an achievement for the time6.  Sullivan was stationed at Kussowlie Barracks in northern India7 in the latter part of his career, which had spanned a remarkable 23 years, before discharge in 1845.

The performance of the remaining men also makes for an interesting study. Twenty of the twenty-five soldiers served abroad as opposed to in Ireland or Britain (‘at home’).  In truth, the performance of the men varied widely, with alcohol too often a problem- an issue throughout the army in this period.  One of the best and worst military records one could ever wish to view can be seen in the shape of Moycullen men Patrick Hourney and John Coen8.

Firstly, it was noted that that conduct of Patrick Hourney had been exceptional.  He had never been entered in the Regimental Defaulter’s Book and had never been tried by Court Martial. He served 13 years in the East Indies with his conduct and performance noted as “very good”.  His service papers confirm that on discharge he was “in possession of five good conduct badges, he had received the Punjab War Medal and two clasps for Mooltan and Goosjerat, the Indian Mutiny Medal and Silver Medal, with gratuity of five pounds for good conduct and long service”.  Despite receiving a gunshot wound in his right thigh during the Indian mutiny on 30th June 1857, Hourney had served on before eventual discharge in 1866 having completed a full 21 years of service.

At the opposite end of the spectrum was Private John Coen whose conduct had been “very bad”.  On his discharge papers, it was commented that he was not in possession of any good conduct badges and that his name had appeared no fewer than fifty-six times in the Regiment Defaulter’s Book of which three were of a serious nature resulting in Court Martial.  In an effort to excuse some of his behaviour, his superiors did state that he was “a clean soldier and respectful to his officers”despite being “addicted to drink”.

As the century progressed, the percentage of Irishmen in the Army dropped considerably, both in number and as a percentage of the army total. This is partly due to the drop in the Irish population as the level of emigration to the U.S. soared, but also partly due to the changes in the outlook of Irishmen toward the end of the century.  Nevertheless, Moycullen soldiers continued to serve across the empire, with the record of those who served in the final quarter century captured as follows:

The key averages of the later soldiers remains in line with the data given, albeit the age at discharge was much younger given the much shorter duration of service. The substantial drop-out rate and a proportionate general performance drop is also noteworthy.  Scathing remarks were reserved for Patrick Mellia, for example, who was released for being “incorrigible and worthless”, while Andrew Kane was “discharged with ignominy” 9.  They were not alone as, for the most part, many of these men proved wholly unsuited to life in the army and either purchased their own release, or were discharged early.

There were notable exceptions, however,, and despite the drop in the numbers serving abroad between 1875-1900, men like Edward Devaney10 shone in the Anglo-Egyptian War in 1882 having also served in Gibralter and Malta.  . Patrick Earner also served with distinction abroad in Malta, Cyprus, Egypt, and then in two separate tours in South Africa (1899 and 1900) during the second Boer War11.

British armoured train in Alexandria, Egypt, during the Anglo-Egyptian War 1882 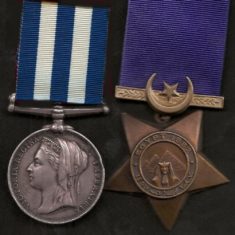 Patrick Donohue (in 1905) enlisted from the village until the Great War when the likes of William Carr fought and perished 13.  With the past commemoration of Carr and all the Irish Great War fallen, we might finally be in a position in this county to also recognise those who went before…

Note:  Other soldiers listed Kilcummin, sometimes ‘Kilcummin, Oughterard’, as their address but these do not form part of this study (which is ‘Moycullen’ only) but may be reviewed at a later date.