You are here: Home>places>Graveyards>Historical Overview of Graveyard Inscriptions 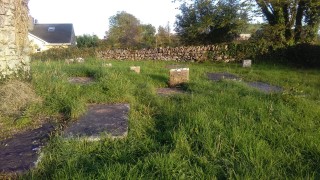 Journal for the Preservation of Memorials of the Dead

Recording and Documentation of Graveyard Memorial Inscriptions in Ireland began in the 19th century following the foundation of the Journal for the Preservation of Memorials of the Dead (JPMD) and publishing them began in 1888 by Leighlin Bridge, Co. Carlow-native Col. Philip Doyen Vigors. From a long-time keen science, zoology, ornithology, genealogical and political interest family, with assistance from contributors and extracts from all over the island of Ireland and with a stated objective to ‘secure a record of existing tombs and monuments of interest’, Mr. Vigors was VP of the Royal Historical & Archaeological Association and had established the “Association for the Preservation of the Memorials of the Dead in Ireland” to record many faded tombstones in cemeteries. As such he was the JPMD’s first editor and published extracts of memorial tombstone inscriptions of (mainly) Ireland’s past landlord and gentry classes.  (see wikipedia.org  and www.iar.ie)

Under a subsequent editor, Walter Fitzgerald, JPMD continued publishing annually until 1934 – when the publication folded due to lack of subscriptions, mounting debts and what it carefully termed ‘changed conditions in Ireland’…clearly indicating subscribers were culturally out of step with the changes in post Independence Ireland. However, it must be said (and even though very much elitist by today’s standards!) JPMD made an important contribution to Ireland’s heritage under English rule and in the early days of the new Irish State – and indeed greatly assisted in preventing many old ruling class monuments from vandalism in these difficult times.

Following JPMD’s demise, graveyard headstone transcriptions were published in various genealogical and local historical journals on a somewhat ‘scattered’ but ongoing basis – in the mid 1960’s by the Ulster Historical Foundation relating to cemeteries in Co. Down. With R.S.J. Clarke as editor this published work continued from 1966 and still continues today. The now defunct Irish Ancestor (1969 – 1986) was another prominent example of genealogy publication. (now available on CD from Eneclann – see eneclann.ie )

In 1971 the Irish Genealogical Research Society (IGRS) formed a sub-committee to investigate the possibility of transcribing memorials on an island of Ireland basis and published their aims and methodologies in their 1972 Journal, Vol. 4, #5. As with the JPMD, they are concerned with the preservation of memorials from the ravages of official and illegal vandalism, carelessness, attrition and erosion. They have also published complete memorials from some graveyards. Certainly the problem of erosion will grow exponentially over time especially with materials such as limestone and schist. The society has kept an ongoing index of graveyards transcribed and these, in the 1970’s, were published on an annual basis, though they are dependent on being notified by the transcriber(s).

Probably the best known (founder) member of the IGRS committee was Brian J. Cantwell F.R.S.A.I., F.I.G.R.S. (1914-92). Travelling widely around various parts of Ireland, mainly by bicycle and in all weathers, he published transcriptions of cemetery inscriptions for Co’s. Clare, Dublin, Wicklow and Wexford – the latter two counties completed in 1986 after 14 years field work.

Since the 1980’s there’s been ‘an explosion’ of interest as Local Historical and Genealogical societies, Libraries, Genealogical Heritage Centres, and many other individuals have become involved and an island of Ireland-wide coverage of cemetery inscription documentation has occurred. And thankfully the entire process is now an ‘all-inclusive’ approach.

In 1985 Ian Cantwell, son of the above Brian, started cemetery headstone transcriptions in (western) Co’s. Mayo and Galway – and (like his father…travelling mostly on a bicycle) he published the results of his 10-year fieldwork (1985-95) fieldwork via ‘Eneclann’ on his 2001 ‘Irish Memorial Inscriptions Vol. 1 CD – ‘Memorials of the Dead: Counties Galway & Mayo (Western Seaboard).

However, the largest genealogy research effort on the island of Ireland was that led by then Taoiseach Mr. Charles J. Haughey in the mid-late 1980’s under the Irish Genealogical Project following a State / Irish Bishops (all religions) agreement to computerise all the existing old church births, marriage, deaths records, some of which dated from the early 19th century. This was established in 1988 following the production of a 5/1988 report by a ‘Roots, Genealogy and Tourism’ Task Force established by the above Mr. Haughey – his answer to a Dail question at the time (by Labour Party T.D. Mr. Michael Bell – 1936-2011) better clarifies the broad aims of the project…which is still running up to the present:

“The work of the task force is now bearing fruit in the Irish Genealogical Project. This project draws together all those with a legitimate interest in genealogy in Ireland and in particular the work of some 35 local centres operating on an all-island basis across the Thirty-two Counties. In these centres, genealogical records of all kinds will be put on modern computers. On the basis of this comprehensive set of records there will be an international marketing campaign to attract people of Irish descent around the world to come back to Ireland to find out about their families.”