You are here: Home>topics>Moycullen During the Famine

Moycullen During the Famine

The Great Famine (1845 -1849) was a devastating and seminal moment in Irish history when the horrors of mass starvation, disease, and emigration tore through the country. The most severely affected areas were the west and south of Ireland with Connaught having a population drop of up to 30% from 1841-51.

The causal factors leading to this catastrophe included sectarian laws, landlords, tenants, evictions and potato blight and have been teased out and discussed in numerous books and articles through the decades and are too broad a topic to do justice to in this article. The function of this article is to give a glimpse into life in the parish of Moycullen during this awful time.

Moycullen during the famine

Based on a review of the 1841 census with respect to the barony of Moycullen:

The parish of Moycullen, as common in the west of Ireland, suffered greatly during the famine.  Starvation, disease, eviction and emigration decimated the community. Here are a few statistics illustrating the devastating impact on townlands and population of the parish of Moycullen: (census figures 1841/ 51)

Landlords in Moycullen during the famine

In terms of the parish of Moycullen during this period, land and wealth was firmly in the hands of a few landlords:

All of these landlords would have contributed to the administration of local relief committees or at public meetings called to provide relief works for the poor.

Specific mentions of Moycullen during the famine

The suffering of the peoples of Moycullen has been documented in several sources including the diaries of Fr. Patrick Fahy, the parish priest in Moycullen between 1840-48. In his letters he gives a harrowing account of the progression of the famine in the parish, for example in a letter dated the 26th October 1845 he says “…harvest is abundant as far as grain is concerned but fears nay starvation on account of a rot dreaded in the potato crop..”, in an August 1846 diary entry Fr Fahy states “…a blight has come on the potato crops….” and further in a November 1846 entry “…the parishioners are in an alarming state about the ensuing spring, not having any seed to put in the ground…”. Another diary entry in January 1847 states “There was a coroners inquest held in Clooniffe on a poor woman found dead; verdict, died of starvation.” In October 1847, Fr Fahy wrote that “….300 people had died of famine and its consequences….”. His last letter entry in May 1848 he states “About 12 a week die, I don’t know the end of it. The mortality is frightful”. He died himself that same year at 48 years of age.

Fr Kenny became parish priest in the Moycullen in 1848 following the death of Fr Fahy. He was a consistent advocate of the poor throughout the years of the famine with several examples of him appealing to the authorities to provide relief for the famine stricken in the area.

The following is taken from the “Report on the meeting for Law Guardians” (Dec 1847):

“The Rev Kenny addressed the board at some length on the state of the district with which he was connected. He represented its poverty in glowing terms and concluded by imploring of The Guardians in the name of charity, in the name of humanity and justice to provide some extra accommodation for the famine stricken poor of his, as well as every other pauperised district within the union….. the committee was therefore provided to provide accommodation and an auxiliary workhouse for this purpose.”

Treasa McMahon tells the story of Fr Kenny “anointing 19 people at the roadside… and later witnessing the struggles of a dying man outside the churchgate..” in her article in the Moycullen Historical Society (now Moycullen Heritage) publication “An Gorta Mór I Maighcuilinn” published in 1997 .

Moycullen Fever Hospital, one of many temporary hospitals opened in rural areas, opened in September 1847, in response to the fever epidemic sweeping the area and the inability of the main fever hospital in Galway to cope with the numbers. The hospital had a capacity for 50 patients and employed two nurses and one ward maid.  510 patients were treated with 88 dying during its 25 month existence as a Fever Hospital. The Hospital was converted in 1849 to house orphans, becoming known as the Moycullen Auxiliary Workhouse, closing in 1851.

The schools in Moycullen

The main school in Moycullen was built in 1835 on the grounds of the current National school. National schools in Baile Nua (1836) and Knockbane followed. It is known that Moycullen school served as a centre to distribute food during the famine.

Pre-famine maps indicate that the Rocks Road as we know it today was a dirt type track up to the 1840’s. Upgrades to the condition of the track probably took place as part of a famine relief work scheme. There are clear links to our famine past across this landscape. On the right hand side of the trail in the wooded area near Cloonabinna there are the remains of a famine village as well as a Famine relief wall acting as a boundary wall for the quarry located at the Ballynahallia end of the Rocks Road. This Famine wall was built by local men employed by landlords or church groups to give employment and income to the impoverished and starving community. Some boundary walls are still evident on the limestone landscape which may have been the only refuge of post eviction victims at this time.

Moycullen Heritage opened a formal heritage trail along the Rocks Road called “The Rocks Road- Mini Burren Trail” in 2018 in order to highlight the history, ecology and geology of the area including the points noted regarding our famine history. The trail sign is located at the GAA pitch near the turn off to the Rocks Road.

People died in their hundreds in the parish of Moycullen during the famine. There are several famine graveyards around the parish including a small site at Cnoc Na gcarranai above Mount St Josephs on the Spiddal road. It is believed that a famine graveyard is also located in the present graveyard in Moycullen church grounds.

Moycullen heritage have made famine related content available here on our website and through publications such as the now out of print “An Gorta Mór I Maighcuilinn” published in 1997.  In marking famine commemoration 2019, we are pleased to make freely accessible for viewing here a scanned copy of that book.  We have also put heritage trail signs at locations such as Mount St. Joseph and Aras Uilinn with famine related information. Our group has reclaimed a famine pot (located at Aras Uilinn) and were involved in the production of a famine memorial plaque and noting that there is a famine grave in the grounds of the church in Moycullen.

A note taken from the Coleraine Chronicle dated 20th February 1847:

“Galway – …. “There are nearly four hundred human beings in this district, consisting of widows, orphans and aged and infirm persons, male and female, totally destitute, …., three of these poor creatures died during the last week of starvation.” The Rev. Mr. Phew earnestly solicits the means of alleviating the privations of the suffering poor of Moycullen”

We hope that this article has given you a little insight into what Moycullen was like during this horrendous time. 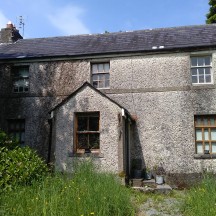 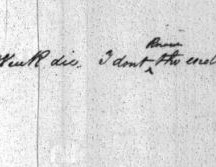 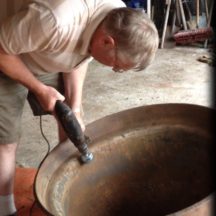 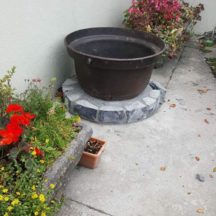 This famine pot was kindly given to the parish of Moycullen by John Cunningham, Kylebroughlan, and is now situate at Aras Uilinn.
Photo Moycullen Heritage 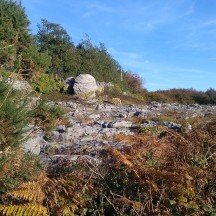 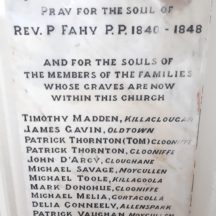 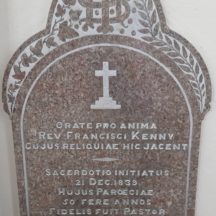 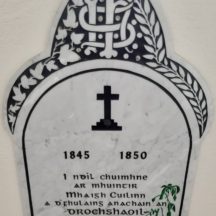 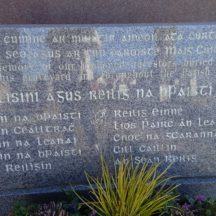