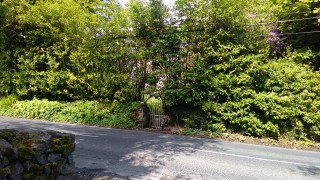 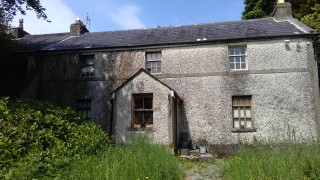 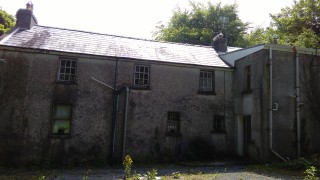 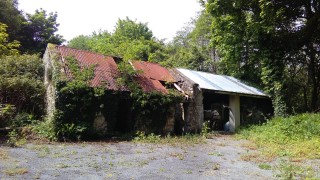 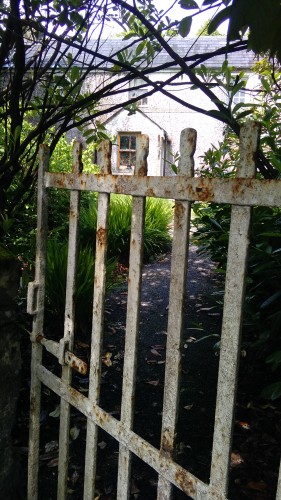 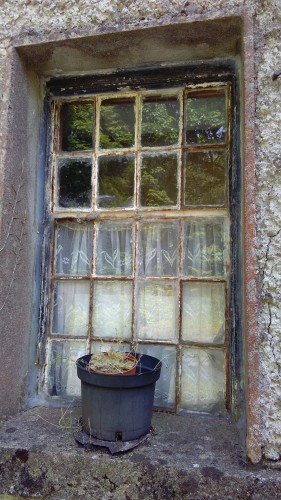 The Moycullen hospital was established under the Fever Act and was granted a Certificate from the Central Board of Health on 31 July 1847. Applications were usually consistent with the high incidence of fever in an area.  It was to serve the Electoral Division of Moycullen comprising 7,343 people in 1841.  The hospital had a capacity for 50 patients, two nurses were to be employed and one ward maid.  The rules for temporary fever hospitals were laid down under an “Order for the Regulation and Management of Temporary Fever Hospitals”.

Meal times and rations were strictly regulated and each hospital matron was to comply.  Breakfast was served at 9.00am, dinner at 1.00pm and supper at 6.00pm.  The dietary intake of each patient was recorded by the hospital authorities.  There were four different categories of diet:  Low Diet, Middle Diet, Full Diet and Rice Diet.  Low diet consisted of three pints of whey in twenty-four hours, the middle diet consisted of a total of sixteen ounces of bread, two pints of new milk and one pint of beef tea per day.  The full diet consisted of eighteen ounces of bread, two pints of new milk, one pint of broth, for which the recipe was provided, and this diet was the only one to allow meat, a half pound of boiled mutton or beef without bone.  The rice diet was fourteen ounces of bread, two pints of new milk and one pint of rice milk, a recipe was also provided for this.  The allocation of a certain diet depended on the state of health of the patients.  Children from five to ten were given half the quantities, children over ten were allowed full amounts.  Special application was to be made to the Board of Health if any change was required to be made to the diet.  Wine, whiskey, porter and arrow root were given to those on low, middle or rice diets but no extras were allowed for patients on full diets.

While in theory such rules were to be observed, in practice this did not always happen, and inspectors constantly monitored the amount of provisions.

Nurses employed in the hospital had to be able to read and write.  As part of their wages, nurses and servants were given ‘liberal rations’.  They were not to ‘lose time in providing and preparing their own meals’ lest they be tempted to use too much of the patients’ food.  A Mrs. McDermott was the first head nurse at Moycullen hospital.  Stronger patients were to assist nurses on duties such as sweeping out wards and giving drinks to other patients.  Visiting hours were from one to two o’clock and no food could be brought in to patients by their visitors.

I do not have any details concerning the house which was to become the fever hospital or its previous use.  It would be interesting to know if the local people objected to the building for such a purpose, as was the case in many rural areas.  The fear of infection led the people of Kinvara to appeal to the authorities to withdraw plans to build a fever hospital in their town.  This also happened in Killeshandra and Drumkeeran in County Leitrim to name but two¹.  My research to date has not uncovered any such letters of complaint.

By September 1847, when the hospital was open, fever was prevalent in the Moycullen district.  Writing in October of 1847, Fr. Fahy mentioned that 300 people had died of ‘famine and its consequences’.  By Christmas 1847, twenty-five additional beds were required for the hospital.  A similar request was made in April 1848 by the Chairman of Moycullen Hospital.  During the cholera epidemic of 1848-9, the hospital was used to treat cholera victims.

During its twenty-five months of existence, Moycullen Fever Hospital treated 510 patients, of whom 88 died, giving a mortality rate of 17%, which was 7% higher than the national average.  A fever hospital in Eyrecourt reported a mortality rate of 29%, one of the highest in the country.  A total of 34,622 patients died in the temporary hospitals nationwide.

The total cost of the Moycullen Fever Hospital was £430 according to a statement read at a meeting in November 1849.  The hospital was no doubt beneficial to those suffering from fever and later cholera patients and went some way towards avoiding an even further catastrophe.

By November 1849, the Galway Board of Guardians, who had taken over the maintenance and funding of the fever hospitals in 1847, decided to discontinue the fever hospital due to the ‘decrease of contagious disease in the Electoral Division of Moycullen and the very few patients that now are and have been for the last 2 months in the hospital’².  Relieving officers, who were responsible for admissions to the hospitals, were to send paupers to the workhouse hospital and not to issue tickets of admission to the Moycullen hospital.

Death was a feature of all fever hospitals and workhouses and often adjacent land was used to bury the dead, the so-called ‘paupers plot’.  The local folklore goes some way towards giving details of burial rituals.  Padraig O’Sabhaois (son of Michael and May Savage, Kylebroughlan) told the Irish Folklore Commission about the appointment by the Board of Guardians of one man to carry out burials in the area: “This individual was supplied with only one coffin in which the deceased was brought to the graveyard and then left into the grave, the coffin being taken back and used to convey the next corpse to burial….. in the same fashion”³.

The use of this building as a fever hospital was but one, albeit a vital, service in its history as a place of refuge during the famine years.  One month after the fever hospital closed, the building was ready to receive pauper children aged between two and five.  Preparations made in that month included the appointment of personnel to run the orphans’ house.  Mrs. McDermott was appointed Matron and she was to receive £12 a year with rations and lodgings.  Incidentally, the doctor who attended at the fever hospital, Dr. Roughan, received £120 per annum, a sum so high as to warrant an inquiry from the Poor Law Commissioners⁴.

Mrs. McDermott refused to work for that salary and Miss O’Connor, an assistant school mistress, was appointed Matron.  She could select a number of able bodied pauper women from Galway workhouse to assist her looking after the children.  These women were not paid and one, Biddy Shaughnessy, refused to do work without remuneration⁵.

The Master of Galway workhouse was responsible for provisions at the Moycullen Auxiliary workhouse and tenders for providing turf, milk and meat were sent to the Board of Guardians.  While a contract for providing provisions was beneficial, it was often difficult to get paid for services and provisions.  The Guardians had very little money and many Unions were bankrupt due to the non payment of rates.  P O’Flaherty of Killagoola requested payment for a supply of boilers but this was delayed until funds were available⁶.

John Sullivan’s tender for supplying turf at 6d per box was accepted⁷.  Four boxes were burnt weekly during winter months.  Thomas Ryelye tendered for the supplying of new milk and this was accepted.  Repair work on sheds were carried out by Matt Conneely at Moycullen and Dangan for the sum of two pounds.  He took down the sheds at Moycullen and erected them at Dangan when the workhouse was closed in 1851⁸.

Details of the day to day running of the orphans’ home are difficult to obtain, as the records do not survive.  Its administration was closely monitored by the Guardians and any discrepancy, however slight, was looked in to.  When medical officer reported that the vegetables were not good and that the children should be given more than half pint of milk per day, the ration was increased to three quarter pints a day.  The health of the children was also scrutinised.

In March 1850, the children there were ‘well and healthy’ but by May they had ‘scald heads and other skin diseases’.  Those infected were removed to the sheds so as to prevent further spreading.

There is evidence that the workhouse was used for reasons other than the accommodation of orphans.  Adults were accommodated there from time to time also.  In January 1850, an inquest was held into the death of a man at the workhouse.  Patt Keady ‘died from want and previous destitution to his admission to the Moycullen Auxiliary Workhouse’⁹.  When the outdoor relief depot at Coolahey closed in 1850, the meal was to be distributed at the auxiliary workhouse.

In February 1851, the Guardians conducted an inquiry into the case of an unmarried pauper woman who had had a baby in the workhouse.  It was stated that ‘she had improper conduct with John Bramally who was a pauper watchman there and who, in the opinion of the committee, was the father of the child’.  Bramally would have been thrown out of the workhouse ‘had he not a wife and family there’¹°.

The workhouse seems to have had a number of problems with its personnel during its existence and changes were frequent.  When in December 1850 a deficiency of 59lbs of oatmeal was brought to the attention of the Guardians, the Assistant Matron, Mrs. Fletcher, was called to explain why.  She was subsequently issued with a set of scales and weights.  In March 1851, she was again called before the Board of Guardians because the following articles were deficient:  16 sheets, 36 shifts, 2 petticoats, 7 rugs, 29 small dishes and 34 stones of Indian meal.  She was sent to work at the Merchants Road Auxiliary Workhouse and Mrs. Petit was to take over the running of Moycullen workhouse.  However, by May she was posing problems also and ‘some irregularities existed at Moycullen auxiliary’ the exact nature of which isn’t stated in the Minute Books.  She was removed from her position and sent to Merchants Road after giving a ‘most unsatisfactory’ explanation to the Board¹¹.  Mrs. Burke was sent to Moycullen to take charge of the children in July 1851.

closing of the workhouse

The first reference to the closing of the workhouse in the Minute Books comes in March 1851.  Martin Morris, a Poor Law Guardian, gave notice that he intended to propose the closing of the workhouse the following month.  His proposal was unanimously agreed to by the Board on 19 April but by May the Visiting Committee were appealing to the Board to consider the crowded state of the parent house (i.e. the Galway workhouse) and the auxiliaries; 281 had applied for admission and were refused due to lack of space.  It was decided to continue Moycullen and in August the Visiting Committee reported that ‘the numbers were so reduced as to admit of some of the auxiliaries being closed’¹².  The inmates at Moycullen and Merchants Road were to be sent to the parent house and the Matrons at those establishments were to be released from duties.  The closure of the hospital was delayed because of the outbreak of scald heads at Moycullen and the fear that the disease would spread throughout the parent house.  The workhouse was eventually closed in the Autumn of 1851 and the building was used as a dispensary afterwards.

Under the Medical Charities Act of 1851, the Unions were divided into dispensary divisions.  No. 4, or Western District of Galway Union, comprised the electoral divisions of Moycullen, Slieveanna, Tullokyne, Kilcummin, Furbough, Spiddal and Killannin.  One dispensary was situated at Spiddal and one at Moycullen.  The medical officer was to receive £50 a year.  Griffiths Valuation of 1856 notes that the dispensary was located at Kylebroughlan and that the lessor was Michael Keady.

The workhouse at Mount St. Joseph, Moycullen was typical of auxiliary workhouses locally and nationally.  During its brief existence, it served as the centre from which the Guardians provided much needed relief to the local population.