A Welcome through the Gateway to Connemara 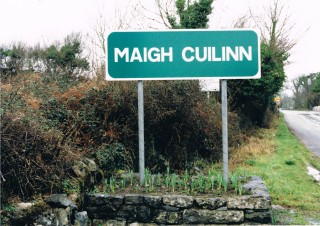 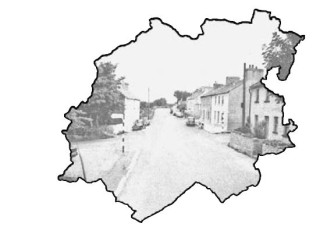 A photo of Moycullen in times past, set in the outline of the townlands of Moycullen
Photo Credit Moycullen Historical Society 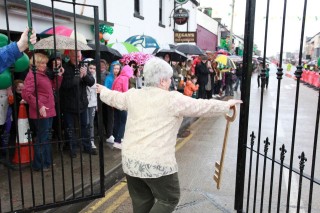 set between the lakes and the sea

The scenic parish of Moycullen with its stonewalled fields, tracts of blanket bog, lakes and rivers, stretches from the outskirts of Galway city to Killannin parish and from Lough Corrib to the parish of An Spidéal. The parish has two distinct landscapes. The half bordering An Spidéal is a more rugged landscape, underlain by granite bedrock. The area east of the N59 is limestone floored lowland that stretches all the way to Dublin.

There are about 59 inhabited townlands in the parish. Most of the parish is in the Gaeltacht, the Irish language and culture is still strong in the area.

Maigh Cuilinn (Moycullen), Gateway to Connemara, takes its name from ‘Plain of the Holly’ but the more romantic explanation is that it got its name from Uillinn who was the grandson of Nuada of the Silverhand the King of Ireland in the days of the Tuatha De Danann, 1200 years before Christ’s birth.  Uillinn overthrew in battle and killed Mananan Mac Lir, the Son of the Sea.  Mananan was also known as Orbsen Mac Alloid and was a famous merchant, who had his principal residence on the Isle of Man. Thus Mágh – Uillin, or the Plain of Uillin. Lough Corrib got its name from Orbsen.

Moycullen Village/ Sráidbhaile Maigh Cuilinn 10km North of Galway city, sprung up at the cross roads of the N59 and Spiddal –Knockferry road, as a settlement around the RIC barracks along with houses built for RIC families. An Garraí Gamhain was the accepted name for Moycullen for many years. The closeness to the city has seen a big increase in population since the 1970s, there is a lively pub and restaurant scene and there is a greater variety of pastimes available for young and old.