You are here: Home>topics>Making Connections>The Richest Place on Earth: Moycullen People in the Virginia City Silver Rush, the Comstock Lode

The Richest Place on Earth: Moycullen People in the Virginia City Silver Rush, the Comstock Lode 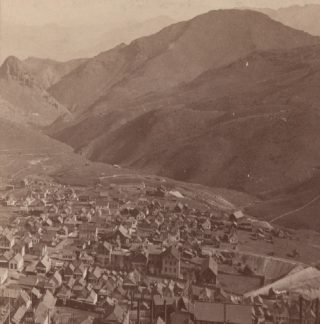 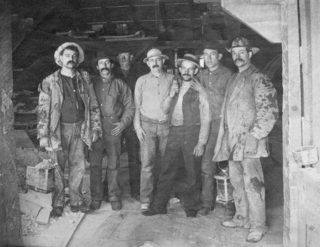 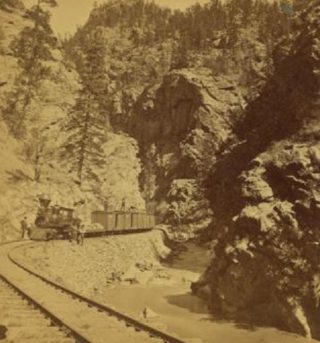 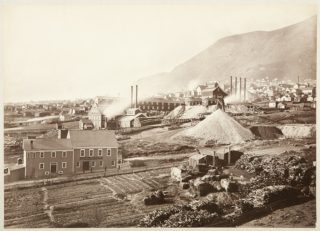 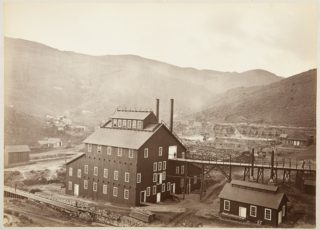 Home to the Hills

Moycullen man Patrick Halloran would have been forgiven for thinking he was traveling out the Mountain Road to Spiddal. But this trip wasn’t at home; he was in the wild, far west of the United States, in the state of Nevada which had only in the last five years been admitted to the Union. As the emigrant’s mule drawn wagon climbed the last few miles to Virginia City, he observed the vaguely desolate, mostly treeless landscape that was reminiscent of the Moycullen bogs; even the yellow flowering sagebrush that dominates the Nevada desert could have been mistaken for the furze that bloomed back home.

But familiar surroundings were not what drew Patrick Halloran to Nevada in the late 1860’s. He was to become one of the first Moycullen people to reach Virginia City seeking to find their fortune in America.

The Richest Place on Earth

The first major silver strike in the United States was discovered at the foot of Nevada’s Mt. Davidson in 1859. The discovery of the Comstock Lode spawned a boomtown that became Virginia City. By the mid- 1870’s Virginia City’s population had experienced six booms and busts; its population ebbed and flowed with each cycle from 5,000 to 25,000 people. By the mid 1870’s almost $370 million of silver ore had been extracted from the Comstock Lode. With such wealth for a town of its size, Virginia City became known as the “richest place on earth”.

The Luck of the Irish

It was during the last big boom, the Big Bonanza, that families from Moycullen found themselves in Virginia City.  Four Irishmen, James Flood, James Fair, William O’Brien and John Mackay, nicknamed the Bonanza Kings, had organized a consolidated mining venture from several small claims and soon found an extensive and previously unknown vein of silver ore beneath the town. During the mid-1870s the Bonanza Kings’ Consolidated Virginia Mine was extracting $3 million of silver each month.

In 1880 Virginia City was by far the largest city in Nevada and one out of every three residents were Irish-born. It seems few however were from County Galway. As in other mining towns of the American West, most Irish had come from County Cork where Ireland’s most significant mines were located on the Beara Peninsula (The 1878 Virginia City Directory counted as the most common surname as many Sullivans as there were Smiths). Nevertheless, Moycullen was represented in Virginia City by an intrepid group of kindred families of Hallorans, McDonaghs, Banes, Noones and Feenys.

Patrick Halloran had been born in Moycullen in 1836. Shortly after arriving in Virginia City he married Winifred McDonagh.  The 20 year-old Winnie had emigrated around 1867 to Boston with her parents Martin McDonagh from Ballinahalla and Bridget Cloonan, who was originally from Tumnasrah. Over twelve years they built their lives in Virginia City and by 1880 Pat and Winnie had produced five Nevada-born children.

Joining Pat Halloran in Virginia City at the peak of the Big Bonanza, was his younger brother Michael, born in Moycullen in 1852. After immigrating to America as a teenager, Michael Halloran moved from boomtown to boomtown chasing the gold and silver strikes that were occurring throughout the American West. For a time he was mining gold and silver in Clear Creek, Colorado and after one of Clear Creek’s periodic busts, Michael headed to California to prospect at Moore’s Flat where he hooked up with another Moycullen Man, Martin Bane (spelled Bean in America, he was likely from Killagoola).  During this time Michael married Hannah (Honorah) McDonagh, Winnie’s younger sister, born in 1847 in Ballinahalla.  Thus at the peak of the Big Bonanza, Virginia City saw in residence  two Moycullen Halloran brothers married to two Moycullen McDonagh sisters.

Working in the mines was young men’s work and at 28 years of age Michael was able to find employment as a miner at the C and C Shaft, the largest and the most modern of the Comstock mining shafts, which was owned by the Irish Bonanza Kings. Temperatures underground where the miners toiled at 3000 feet below the surface could reach 130 degrees. Former US President Ulysses Grant visited one Virginia City mine in 1879 and declared “that’s as close to hell as I’d ever want to be”. One mine recorded sending down 95 lbs. (43 kg) of ice per worker per day to keep them hydrated.  Strong, experienced young men like Michael were sought by the mine owners for the 40 hour work week (a quite reasonable work week for the time only because of the intensity of the labor).

Patrick Halloran, on the other hand, at 40 years old was beyond his working prime, but he did find marginally less strenuous work as a teamster at the Omega Mill in Virginia City. The mills crushed and amalgamated rock and Patrick as a “cart man” would have been engaged in carting the ore bearing rock from the mines and delivering it to the mill.

Patrick’s wife, Winifred McDonagh, kept house. Home for Patrick and Winnie, on South K Street not far from the C and C Shaft was likely a shanty made of scrap wood. Their makeshift cabin was out in the back of another shanty occupied by the Moycullen family of Andrew Bane and his wife Margaret (Maggie) Noone originally from Coolaghy or Newtown. Andrew, born in 1835, the brother of the Martin who had mined with Michael Halloran in California, worked at the nearby Utah Mine. It was undoubtedly of great comfort for Winnie to have Maggie, another woman from home, to help care for the combined twelve children of the Halloran and Bane households on South K Street.

Movement of Moycullen Immigrants from Washington to Virginia City

Another family of note was that of Matthew McDonagh. Matthew, most probably a cousin of Winnie and Hannah, was born in 1845, likely in Leagaun, the son of Thomas McDonagh. Matt McDonagh was married to Hannah (Honorah) Feeny from Killarainy, the daughter of Thomas Feeny and Judith Connor. In Virginia City they lived with their five children and Hannah’s older brother Tom Feeny who worked with Patrick Halloran at the C and C Shaft.

Interestingly, before settling in Virginia City in the mid-1870s, Matthew and Hannah had lived in Washington DC in the Little Moycullen settlement around NW 23rd street and lived in the same road as Martin Keady and Redmond Sullivan and their families from Moycullen.  While in Washington, their first two children Thomas and Nora were born. Building on his experience as a bartender in Washington, Matt McDonagh exhibited his ambition by advancing to a “liquor dealer” according to the 1870 Federal Census.

In Virginia City, McDonagh lifted his status further to become a saloon keeper. He was the proprietor of one of more than 100 saloons that existed in a town of 25,000 people at that time of his arrival in town. McDonagh’s was likely a ‘one bit” saloon, so called for the price of a drink of 12 ½ cents. McDonagh’s Saloon would have catered almost exclusively to Irish miners and laborers as the saloons in Virginia City were commonly segregated by ethnicity and social class.

On the Move Again

In many respects Virginia City was an economic and cultural appendage of San Francisco, the bustling metropolis 400 km to the west on the Pacific Coast. The Virginia City Moycullen families likely already had connections and relations in San Francisco: Forty percent of people living there were Irish-born in the late 19th century. Most, but not all, the Moycullen families would relocate to the “City by the Bay” by 1890.

Patrick Halloran and Winifred McDonagh would leave Nevada in the 1880s and settle in San Francisco with their eight children. Brothers and sisters and in-laws Michael Halloran and Hannah McDonagh would move on to Los Angeles, an unusual destination at the time for Irish people, for few Irish located there compared to San Francisco. In Los Angeles Michael Halloran would take up the quintessential Irish-American occupation: he served more than 25 years as a Los Angeles Police officer.

Money Isn’t Everything, But Happiness Is

The Hallorans, McDonaghs, Banes, Feenys, and Noones went to the “Richest Place on Earth” with hopes of becoming rich themselves. That was not to happen. The wealth of the Comstock went to San Francisco speculators and investors, rather than to the miners, teamsters, saloonkeepers, laborers and mothers that toiled to make the Comstock Lode the legend that it was. Nevertheless, a generation that had to leave their beloved homeland with nothing, established a solid foundation for their children and succeeding generations to find success in America.