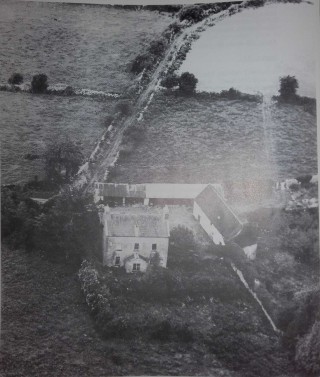 Deerfield - This was the parochial residence built by Father Francis Blake P.P. Circa 1826. The house is no longer there, but the old walled garden is still in existence.
Moycullen Historical Society

On Trinity Saturday, 25th May 1839, three priests were ordained in Maynooth for the Galway Diocese. These men were destined to play a significant roll in the lives of a forsaken people.

Michael Kavanagh, a native of Galway, was best known as an orator, writer and activist. His first curacy was Moycullen where he worked alongside Father Patrick Fahy P.P. It is said of him that he knew everything that could be known about the history of Moycullen. He transcribed much of what he had learned from “na seandaoini”, a book entitled “Sheumas Dhú”. Sadly, the remainder of his manuscripts and notes have disappeared. He is buried in Oughterard church, where he was an outstanding parish priest for many years.

James Castiaux was the son of Joseph Castiaux, Humanity Dick’s French valet. He administered in Oughterard when Father Kavanagh returned there as parish priest in 1852.

Very little is known of Francis Kenny’s origins. The late Monsignor Martin McDonagh states that he was a native of Kilmore, which may be interpreted as the Diocese of Kilmore. Wherever he came from, Moycullen was to become his home for nearly fifty years. Father Kenny was a lifelong champion of human rights to the end of his days. Born in 1807, Francis Kenny matriculated in Maynooth in 1835 and after ordination, he was appointed to Kilcummin parish, Oughterard, with Joseph Castiaux.

advocate of the poor

He served in Oranmore from 1843-1844 and was then appointed parish priest to Spiddal from 1844-1848, in the worst of times and the poorest of country.  In 1835 Archbishop McHale and Dr. Browne had made an effort to rearrange their Connemara boundaries. In 1842-1844 Tuam administered all of Spiddal.  While in Spiddal, Father Kenny constantly appealed to the authorities for relief for the famine stricken poor of the area. An extract from the report on meeting for law guardians illustrated this.

“The Rev Kenny addressed the Board at some length on the state of the district with which he was connected. He represented its poverty in glowing terms and concluded by imploring of the guardians in the name of charity, in the name of humanity and justice to provide some extra accommodation for the famine stricken poor of his, as well as every other pauperised district within the Union. The Rev Mr Kenny’s observation made a deep impression on the minds of the Board and a committee was therefore appointed to provide the most suitable accommodation as an auxiliary workhouse for the purpose. Captain Hillard and Doctor Browne were requested to accompany the committee in the selection of a house”

Father Kenny also built a school in Spiddal, which is now the parochial house.

In August 1848 Father Francis Kenny came to Moycullen where he was to remain until his death in 1897.  He faced the very same problems in Moycullen as he did in Spiddal. Poverty, starvation, disease and death were all around him.

Of him, the late Monsignor Martin McDonagh of Moycullen wrote:-

“He was a man of sanctity and had great influence in the parish. He was a very fluent speaker of Irish and often ended his sermons with old invocations of the saints. He put on additions of his own especially an invocation to his own patron St. Francis. He made more than one attempt to join the Franciscans but on each occasion returned to his parish. He wore a beard, probably the last priest in the diocese to do so. He died on the 27th March 1897 and is buried in the church. He was a native of Kilmore and towards his death was semi-retired. He surrendered charge of the schools and continued saying one of the masses on Sunday. He attended confessions, stations etc. The parish revenue was 50-50 with his administrator John Fitzgerald. He lived in a house over half a mile from the village to which was a farm (rented by him). His nephew also (Tim) Kenny worked the farm for him. A Dr. Kilkelly was the landlord and he refused to recognise the nephew after the priest’s death. He was a pious old man who could preach well in Irish. He died while saying the angelus at the age of 90 years. The late Dean A. Considine was the Administrator at the time”

“Deerfield” was the priest’s residence then. The house was built by the Rev. Francis Xavier Blake P.P. around 1826.

no to increased rates

Fr. Kenny continued his work on behalf of the people of Moycullen parish into his old age. He deplored the increased rates which were being demanded in 1885 for the construction of the Galway-Clifden railway.  A letter to that effect was written on 2nd January 1885 to Dr. Kilkelly of Drimcong House.

I regret very much that my old age, bordering on 76 years, my consequent infirmities and the danger of a journey to Dublin at this season of the year, entirely unfit me to give evidence against the possibility and expendancy of a guarantee required of the people of this parish for the construction of a railway from Galway to Clifden. I can declare on oath, as I would be prepared to do before the Privy Council, that the people of my parish and of the adjoining parishes are, for the greater part, unable to meet their present liabilities in the shape of rents, poor rates and county cesses.

These latter assignments have within the last few years increased to such an enormous degree that most of the tenants in these western districts will be reduced to ruin and beggary and obliged to give up their holdings from sheer inability to pay rents, rates and taxes. This assertion of mine is neither imaginary or overdrawn as can be undeniably proved by the several collectors of these imposts. It will be either rents or rates but not both. Impossible, I can assure you with the certainty of my existence that if a reduction be not made and that speedily, in these terribly oppressive taxations, the time is not far distant when another agitation far more destructive to the peace, concord and wellbeing of this unhappy country than has yet occurred, will arise, and be attended with worse consequence to some people at least.

Therefore, I would humbly and earnestly beg of the Hon. Members of the Privy Council not to place on these already impoverished Baronies a burden which they cannot nor will not bear.  If my health and bodily infirmities would allow, I would implore to their presence, the Privy Council, to save this poor and over taxed territory from the possibility of further taxation, tho desirable and necessary as I fully admit, is a railway from Galway to Clifden. Please hand this to W. Stapleton, who can make any use he pleases of it and believe me yours very truly.

Get up and by all means Mr. Wallace the Cess. Collector who will prove beyond age or pay the truth of my statements. He would be a better witness that a train full of others. F.K.

I returned you on last Sund. immortal thanks on my own part and that of my parishioners for your indefatigable executions on our behalf and pray they may be successful. F.K.

Francis Kenny was a man of God, who in his lifetime made three attempts to join the order of his patron saint St. Francis, but each time returned to his parish. Like a true follower of St. Francis, he thought nothing of speaking to Boards of Guardians and Privy Councils if he thought that the poor and oppressed might benefit. He knew the mood of the people and could predict what was to follow.

In his letter to Dr. Kilkelly, he expressed these sentiments which eventually came to pass. “The time is not far distant when another agitation far more destructive to the peace, concord, and wellbeing of this unhappy country than has yet occurred will rise and be attended with worse – consequences to some people at least”.

The material for this article was sourced from the Diocesan Archives Galway most of the manuscripts were hand written by the late Dr. Michael Browne, Bishop of Galway, whose dedication to the history of the Diocese of Galway must be acknowledged.

To Thomas Maye, Diocesan Financial Administrator and Archivist, who made all this possible, sincere thanks.