A place of religious tradition since penal times 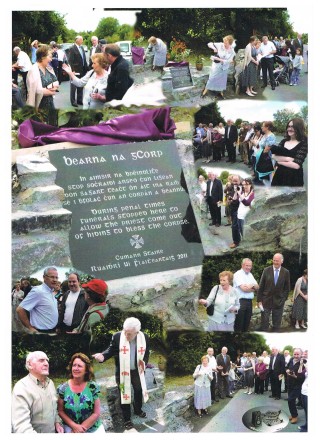 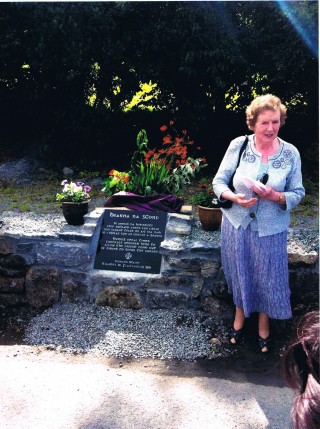 Bearna na gCorp is on the left as one travels from Maigh Cuilinn to Cill Ainnin and about half a mile from the village on Tommy Clancy’s land. This place was heavily wooded until Tommy reclaimed it to make a very fine farm nearly 50 years ago. The local people always blessed themselves when passing this spot and hearses regularly stopped for a few seconds until about 20 years ago. It was a folk-religious shrine for a very pious people.

a priest in hiding

Bearna na gCorp was where the funerals from the southwest of the parish stopped briefly on their way to the graveyard in Maigh Cuilinn during penal times. This was done to allow the priest to come from his hiding place in the wood to bless the corpse on its final journey. As he sprinkled the holy water, he might have used the following old prayer:-

And as the priest raised the cross:-

A Mass Rock served as a crude altar in the Penal Times; the priest often rushing from a copse or grove of trees to say a hasty mass for the faithful, balancing the sacred vessels precariously on the rough surface of the rock; then beating a hasty retreat before the British cavalry could get wind of his presence.

But could this be? Surely such an arrangement couldn’t last for long without the priest’s capture – unless the Redcoats were very dim indeed? Could this kind of routine be compatible with the priest’s safety?

In this respect, it is worth noting that many priests were registered to work during the period of the Penal Laws in the eighteenth century. Many more, unregistered, quietly arrived from the seminaries in Louvain, San Omer and other European, Catholic countries. For long periods, in various parts of the country, the authorities turned a blind eye on their activities. The laws were mainly against education, job opportunities and ownership of property, not the actual practice of religion. The essential purpose of the Penal Laws was not to destroy Roman Catholicism, but to ensure that the Catholics were kept in a position of social, economic and political inferiority.

But recent road improvements, faster cars and an increased volume of traffic has physically caused the removal of this shrine from our consciousness. Changing attitudes to religious beliefs have eroded its place in the folk memory.

Nowadays the dead rest in Aiseiri, warm, spacious and comfortable as it should be, time and space to pray and grieve. And, though replaced and largely forgotten, Bearna na gCorp is a symbol of the resilience, that enduring “teacht aniar” of our forefathers. And a final prayer for the countless unknown individuals who eked a frugal living in all the townlands beween Aill Fhraoigh and An Tamhain Uachtar, and who passed here briefly on their last pilgrimage.