The importance of recording a story you were told as a child – it may be the only story that keeps the history of an old tradition alive….

The annual 16th of May pattern to the holy well of St. Brendan at Ower no longer takes place and any visual evidence that may remain of the well, is now overgrown*.

This is a translated extract from the 1937 Schools Folklore Collection (Tullokyne School) regarding St. Brendan’s well in Ower.  The story was recorded by Aodh O’Maidin, Kilcloggaun, from his father Tadhg O’Maidin (Timothy Madden)…

Near our school – Tullokyne school – around half a mile west of it, there is a holy well.  It is near the bog.  It is called “Tobar Bréandán”.  Every Friday people visit the well and perform a circuit three times around the well praying the whole time.  They say seven Paters each circuit.

There was a woman in this area once and her name was “Siseala Mór”. One day when she was going over a wall, a large black thorn went into her elbow.  She was going to doctors all year but it was of little benefit to her.  There was no doctor or medical person who was capable of removing the thorn.  She went to the priest and he told her to go to “Tobar Bréandán” and to rub a drop of the water on the wound.  She went to the well.  She washed the bandage that was over the wound in the water of the holy well.  She placed the bandage back again on the wound while it was wet and the next time she removed it the thorn had come out and nearly a cup of stuff with it.

Long ago, it was on Sunday they used to visit the well.  But one time a priest came – an tAthair Ó Concubhair he was called. And he said to visit the well on the day our Lord died – on Friday. During his time here he cut a cross into a stone and blessed it.  He blessed another stone as well.  The two stones are still there.  If you rubbed the stone to your eye, even if you were blind, you would be cured.  People leave horseshoes, nails and things of that sort there.

There is a large black hawthorn bush growing beside it and when people are going to America, they bring a thorn from the tree with them as it is said they will have a safe journey if they do that.  There is a burial ground for children nearby.

At “Tobar Bhréandáin” long ago, there would be a procession every St Brendan’s Day, i.e. on the 16th of May.  Afterwards the young men would play hurling in “Léine Mháire”, that is the name of a field nearby, and the thimble men and the tinkers would be there and it was a great day for young and old.

Click here to view the Original Story as gaeilge on Duchas.ie (we are grateful to county Galway Heritage Officer Marie Mannion, and Europus for providing the translation)
* Please note well is situate on private property
Born in Tralee Co Kerry in AD484 and Died in Annaghdown Co Galway in AD577, read more about St. Brendan 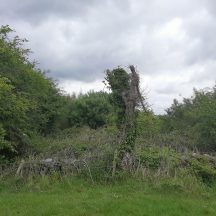 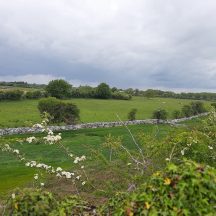 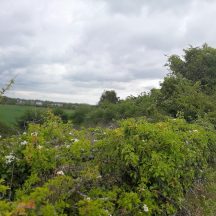