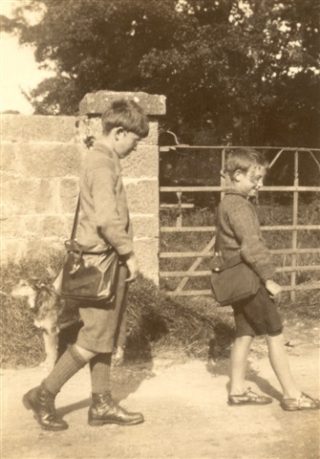 Little information exists now about our local holy wells and the rituals or practices observed at them but we do know from Pádraic Breathnach’s book “Maigh Cuilin a Táisc agus a Tuarisc”, that on the last Sunday in July (Crom Dubh Sunday) and again on the 15th August (The Feast of the Assumption) people gathered at the well of St. Caillín in Corbally townland.  (No photograph available of this well).  “The rosary was recited while people circumambulated the well, many on their knees. Water from the well was reputed to draw thorns embedded deep in one’s flesh, to cure sore eyes and rheumatism”.

As part of the Schools Folklore Collection in 1937, (when over 50,000 schoolchildren in the 26 counties collected oral history, topographical information, folktales and legends, riddles and proverbs, games and pastimes, trades and crafts, from their district), a young Tim Regan of Drimcong (uncle of Jim Regan, Regan’s Bar) recorded a story of this well as relayed to him by Tomás Bane from Gurrane.  You can view the essay in Irish as it appears on the Duchas website or read its translated version hereunder…

Holy Wells in the Parish of Moycullen

A translation of an extract from the National Folklore Commission 1937 as told to young Tim Regan, Drimcong by sixty years old Thomas Bane2, Gurraun.

The old man talks about five1 holy wells in the parish, one each in Tooreeny, Tullokyne, Killagoola, Corbally and Knockaunranny. He tells us that each of them is supposed to have a cure for eye problems or for burns and that Caileen’s well/Tubber Caillin in Corbally had a cure for both.

Legend had it that a Viking filled in the Corbally well with clay and stones and returning later, found the well to be restored to its previous state. He filled it in again with the same result but, when his third attempt was unsuccessful, he thought better of it and left it so. He tells us there used to be a statue of the Virgin Mary but that there was only a small piece left at that time.

He also recounts the tale of a religious brother in Athlone having a vision in which he is told to seek out the well and to throw seven stones into the well that he would find under the oak tree standing over the well. When the brother got to the area, he was in trouble because nobody knew exactly where the well was. He soon saw a cow eating ivy from an oak and knew this was a sign from God and he started digging at the bottom of the oak. He found seven stones in the shape of a circle, threw them into the well beside him and left it at that.

He goes on to say that a few years previously a man named Séamus Kyne had filled in the well and all his stock began to fail until all he had left was the ass. He went to the priest and asked him to help. The priest told him to open the well again and from that day on his stock prospered.

He next tells us about a man from Carna, Séamus Sheáin Bháin Conneely, whose son had a thorn in his eye for a year. He came to Caillín’s well and, as there wasn’t any water in it at the time, he took some clay home with him and put it on the boy’s eye. The next morning the thorn was gone from the son’s eye.

A lot of people visit the well on May Day and every August. They go around the well on their knees seven times, saying the Rosary as they do so.

Thank you to Tomas O’Dubhda for this translation.

1. As part of the many wells in Moycullen, we have subsequent information that  9 were in fact celebrated as holy wells.  To date we have received no further information on the Knockaunranny well referred to in Tim Regan’s essay.  The recorded wells are as follows:-

2. Thomas Bane, the son of John Bane and Mary Madden of Drimavohan, was born in 1863 and married Mary Bohan (daughter of Thady Bohan) of Curragh on 5th February 1891.  Thomas outlived his wife Mary, and died at Gurrane on 24th April 1948, aged 85, in the presence of his nephew-in-law Peter Bohan.