A holy well in the townland of Gortachalla

Heading south west, on the left hand side of the small bridge on Gortachalla Road, bounded by a stone rectangular wall, you will find the now overgrown holy well, Tobar Bríd or St Brigid’s well.  It is a natural spring, circa 500m south of Gortachalla Lough, and feeds a small stream running north west.

Sadly, to our knowledge, no detail relating to the history of the traditions of this well remain.  We would be most delighted to hear from anyone who may have information to the contrary.

This holy well, situate on private lands*, is noted on the register of monuments and places under GA068-017, and is protected by the National Monuments Act.

* We would remind people to please respect the fact that access to private property can only be with landowner’s permission. In this case, the holy well is clearly visible from the bridge on the public roadway without having to gain access to the field

Saint Brigid, according to folklore, was born circa 451 in Faughart, north of Dundalk in County Louth to father Dubhthach (a chieftain of Leinster) and mother Brocca (a christian pict slave).  Circa 480, Brigid founded a convent in Kildare (which became a center for religion and learning), and subsequently a double monastery for nuns and monks and a school of art.  She was the patron goddess of the Druids and renamed by Christendom as Mother of the Gael/Our Lady of the Irish or foster mother of Jesus.  Brigid was renowned for her dedication to the poor and even had a reputation for being able to turn water into beer!.   She is said to have died on the 1 February 525 and her remains re-interred on two occasions – firstly in 878 from their initial burial site in Kildare Cathedral due to the Scandinavian raids, and secondly from the tomb of Saint Patrick and Saint Colmcille in 1185 to Down cathedral.  Relics of Brigid, such as a tooth, have appeared in Cologne Germany and Melbourne Australia and her skull is kept in a small church near Lisbon Portugal having previously been in Austria (relics of her skull are also found in Kilcurry, Co Louth and Killester in Dublin).  Similar to St Patrick and St Colmcille, there has never been an official canonization of St Brigid.

Brigid’s feast day is 1st February and her symbolic cross is seen throughout the countryside and the world.  Tradition states that St Brigid’s crosses were made for protection against fire and lightening as well as illness – epidemic disease could also be held at bay.

Another practice associated with her feast day is that of Brat Bríde. This involves leaving a piece of cloth or ribbon outside before dawn to collect dew. This was carefully kept aside (as it was believed to have curative powers). The brat, often a tie, belt or braces were left out and worn by men whenever they engaged in any dangerous work for protection. The ribbon would be hung on the door so the saint would touch it. It was particularly useful against pains in the head such as headache, earache or toothache. 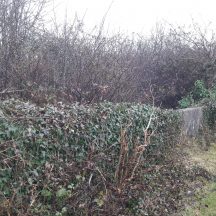 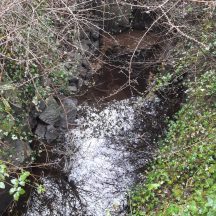 The waters of the well at Tobar Bríd
Photo Moycullen Heritage 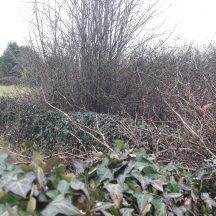 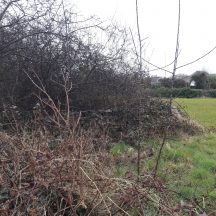 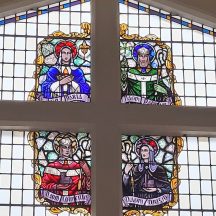 St Brigid is depicted on the bottom right quadrant of the west facing window at The Church of the Immaculate Conception Moycullen.
Photo Moycullen Heritage 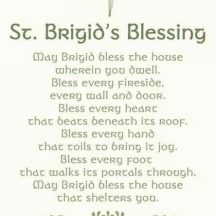 Thank you to Dean Michael McLoughlin for sharing this prayer. We acknowledge its author or original source are unknown to us, so we are unable to attribute correct credit.
Tags
gortachalla (4)
holy well (3)
tobar bríd (1)