You are here: Home>topics>Gastronomy>Killing The Pig 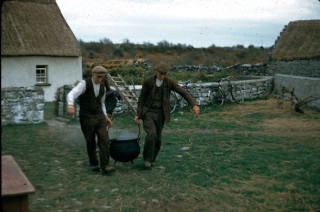 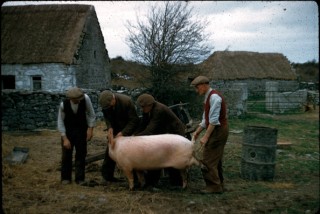 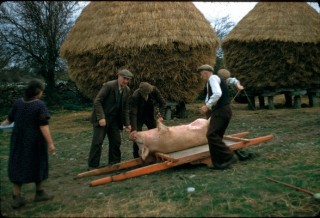 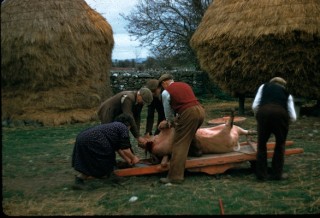 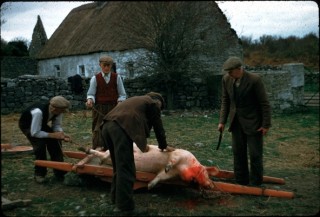 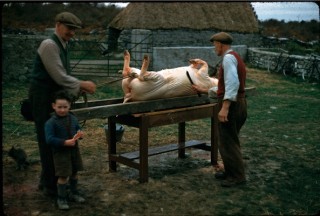 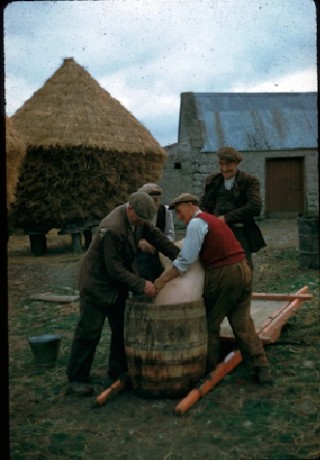 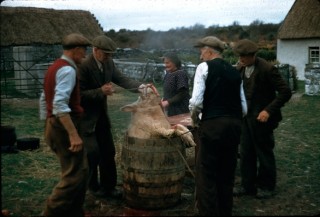 Every house in Clooniff killed at least one pig each year, depending on the size of the family.  This major event usually took place after harvest time (late October – early November), when the weather was cooler and flies posed no threat.

The killing of the pig was only the climax to a long, well-planned process.  The choosing of the pig was all-important and the ideal pig was chosen in early spring.  The choosing of a pig followed a time-honoured routine.  The pig was examined from all angles.  Firstly, it was always a female pig that was killed.  Secondly, the length of her snout, the straightness and length of her back, the firmness and curve of her shoulder were all taken into account.  The final decision was not taken lightly and it was the man of the house who finally decided which animal was to be picked.

Once the pig was chosen she was immediately placed into regal isolation.  Traditionally it was the woman of the house who looked after her feeding and fattening.  The pig was treated with great care, getting large portions of boiled potatoes, bran and milk.  Getting the pig into peak condition was an art in itself.  If the pig was getting over-fat she was let out into the “calves’ field”, where she hardened up.

At least a week before the pig was to be killed, a fixed plan of operations was put into motion.  There was an expert, the late Martin Tierney, in Clooniff who was a dab hand in the art of sticking a pig.  Mr. Tierney was booked a week in advance before the killing was to take place.  In Clooniff the pig was killed humanely, and the killing took place in a shed.  The shed was scrubbed and cleaned out with bluestone and boiling water a few days before the killing.

On the day the pig was to be killed, the woman of the house boiled a few potatoes and when the potatoes were boiled she mashed them up.  The pig was enticed into the shed using the mashed potatoes.  While the pig was distracted (she was given the potatoes to eat) Martin Tierney crept silently up to the animal and from behind he gave her an almighty crack on the head with a sledgehammer.  After she was knocked out, she was lifted onto an ass cart where she was stuck with a knife to draw her blood.  The blood was carefully collected in clean buckets; not a drop was to be wasted as this fresh blood was used to make black pudding.

After the pig was bled, she was covered with a canvas bag and scalding hot water was poured over the bag.  The men then proceeded to shave her.  After this process was completed, the pig was gutted and hung.  That night the carcass was cut up, salted and put down a large barrel.  The pig was left there for three weeks untouched.

After the three weeks the carcass was removed from the barrel (the barrel was then washed and scrubbed, and left up for the next time). The bacon was hung on the chimney breast and this way the farmer had smoked bacon.

*  The Kodachrome slides used to illustrate this article were taken in 1956 by cultural anthropologist Robert Creswell.  Creswell conducted a major study of the inhabitants of Kinvara, Co Galway in the mid-1950s.  Cresswell died in 2010 and donated his archive of black and white photographs, colour slides, 16mm film footage, documents and notes etc. to the nation. He also insisted the hoard remain copyright free.  Robert Creswell Gallery at Kinvara.com