You are here: Home>topics>Gastronomy>Toasting Fork

Toasting before Toasters as we know them today 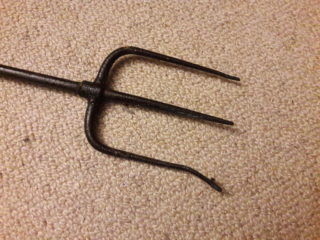 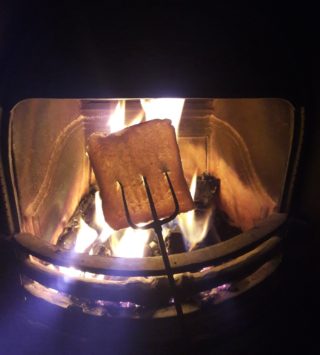 The earliest official piece of toasting equipment was a toasting fork, where food was skewered to the prongs and ‘toasted’ in front of open flames.  Most of these kitchen tools were made from brass, iron or simple wire with silver toasting forks sometimes used in diningrooms.  The one shown in Photo 1 is a solid iron fork with wooden handle, once used by a local Moycullen family.  In later years telescopic toasting forks (such as that shown in Photo 2) were invented – some say for travelling purposes and more say it was so you could get closer to the flames without burning your fingers!

Renowned Chef of his time, Alexis Benoit Soyer, tells us on p165 of his book “A Shilling Cookery for the People”, published in 1854, How to Toast Bread:-

Procure a nice square loaf that has been baked one or two days previously, then with a sharp knife cut off the bottom crust evenly, and then as many slices as you require, about a quarter of an inch in thickness. Contrive to have a clear fire: place a slice of the bread upon a toasting fork, about an inch from one of the sides, hold it a minute before the fire, then turn it, hold it another minute, by which time the bread will be thoroughly hot, then begin to move it gradually to and fro until the whole surface has assumed a yellowish-brown colour, then turn it again, toasting the other side in the same manner; lay it then upon a hot plate, have some fresh or salt butter (which must not be too hard, as pressing it upon the roast would make it heavy), spread a piece, rather less than an ounce, over, and cut the toast into four or six pieces. You will then have toast made to perfection.

The first electric toaster was invented in 1893 by Scotsman Alan MacMasters.

Do you remember a toasting fork being used?  Don’t forget to leave your comments below….