The Townlands of Moycullen 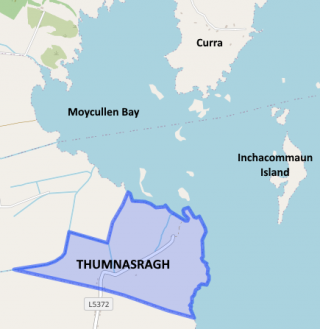 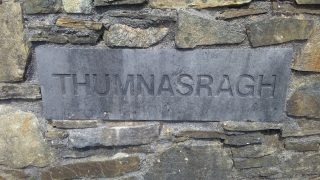 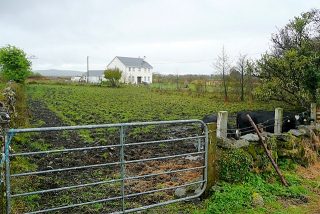 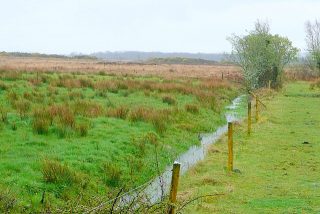 “Tumnashrah…..there is nothing remarkable in it”. This according to the field notes of the 1840 Ordnance Survey map, but a sentiment undoubtedly not shared by its residents past and present. Its geographical coordinates are 53° 20′ 20″ N, 9° 8′ 4″ W and it is bounded by Clooniff and Moycullen townlands on the west and by Lough Corrib on the north, south and east. Thumnasragh is located in the Gaeltacht 5 km to the east of Moycullen village and 12 km northwest of Galway City.

Thumnasragh is located in a flat, low lying area on the western shore of Lough Corrib. The townland is bisected by a single road, the L5372, which terminates in Thumnasragh at the site of the extinct clachan which gave the townland its name.  The landscape is characterized by hedgerows and low stonewall enclosed fields. O’Donovan’ Field Name Books described Thumnasragh as “wet and Moorish” with very little land under cultivation. Thumnasragh also includes three islands located offshore in Lough Corrib: Illaunbeg, Illaunmore, and Inchacommaun. Griffiths Valuation recorded the area of Inchacommaun as 6 acres, 0 roods and 12 perches while Illaunbeg (1 rood, 26 perches) and Illaunmore (2 roods, 9perches) were included with 21 other small islands offshore totaling 7 acres 0 roods and 37perches. Total area of Thumnasragh as recorded in the 1851 Census was 165 acres, 1 rood and 36 perches.

O’Donovan’s Field Name Books provides the name Tum na Srath, translated literally as “bush of the holms” or holly bush. Over time in historical records the name has been recorded with various spellings: Tumnasrah, Thumnasragh, Thumnascrah, Turnascragh and Tumnasra.

The Tithe Applotment Book of 1828 makes no mention of Thumnasragh but records a place called Powers Hill that appears to refer to Thumnasragh. Owner of the land is James Lynch, Esquire with three landholders (tenants) listed as Andrew Cloonan, Peter Egan and Thomas Bohan. Together the three jointly hold 132 acres of which 125 acres are rated as poor quality 3rd, 4th or 5th Class land.

The Griffith Valuation records show that Thumnasragh was the property of Lord Campbell, an MP for Edinburgh and a Chief Justice in England who briefly served as Lord Chancellor of Ireland in 1841. He was also a director of the Law Life Assurance Company which, through its acquisition of the estates of the Martins of Ballynahinch, owned vast properties in Connemara. Lord Campbell gained possession of the Moycullen estates of Andrew Henry Lynch in 1851. The total Annual Valuation of Ratable Property of Campbell’s Thumnasragh holding was £17. By the time of Griffiths Valuation there were only two occupiers listed in Thumnasragh: Martin Connell and Thomas Cloonan. Connell was shown as having a house and land and Cloonan had those and an office.

The Blake Census was the work of Francis Xavier Blake, the Parish priest in Moycullen between 1792 and 1825.  The Census commences in 1793 and includes the name of every married man then residing in the parish as well as unmarried men having a separate dwelling whether bachelor or widower. Notations are made for those who are new to the parish, have moved, married, died or becomes a widower.

The only records available for Thumnasragh for the period from 1841 to 1891 are the total number of houses and population:

Thumnasragh in 1901 had a population of 16 people, 8 men and 8 women divided among three households: the Connells, headed by Michael Connell, the Bohans, headed by Catherine Bohan, and Anne Egan (erroneously listed as Regan in the census) who lived alone.  The enumerators responsible for the delivery and collection of the census forms in these local areas at the time would have carried out the chore by bicycle; the 1901 enumerator for Thumnasragh was RIC Constable Michael Moore, based in Moycullen barracks.

Everyone over the age of 5 could speak Irish and English with the exception of Miss Egan who spoke only Irish.

By the 1911 Census the population of Thumnasragh declined to just 10 people, its lowest point since 1871. The same households present ten years earlier remained in 1911 and the enumerator was, Moycullen barracks based, Constable Michael J Lyster (grandfather of television sports presenter Michael Lyster).

Origin and Diaspora of Original Families

Little is known of the original home places of the families recorded in Blake’s Census: the Cloonans, Conneelys, Connors, Egans and Phelans. Family lore has it that the Cloonans may have originally come from islands in Lough Corrib and there are indications that the Egans may have been from the vicinity of Menlo, on the opposite side of the River Corrib.

From at least the 1860s until the early 20th century all residents of Thumnasragh were descended from, or were close relations by blood or marriage to, a single woman, Maria Egan (1807-1898), daughter of Patt Egan, who was recorded in Blake’s Census. She had first married Thomas (Michael) Bohan of Curra, the townland across Moycullen Bay from Thumnasragh. They had two Bohan children before he died. Maria then married Martin Connell who was originally from Menlo, County Galway. Maria had three children with Connell and their descendants still live to this day in Thumnasragh. The Bohans were resident in Thumnasragh well into the 20th century and still live in Moycullen.

By the time of Griffiths Valuation (1856) only Martin Connell and Thomas Cloonan were named as tenants in the townland. Thomas Cloonan and his family left for Cloonmore, Rosscahill around 1860. His descendants today remain locally in Cloonmore and Knockferry, although several of his eight Thumnasragh-born children would emigrate to Boston and California.

The fate of the other original families is largely unknown. Some, such as women from the Phelan family, married into the Cloonans but it is assumed that most others in those families emigrated in the 19th century.  Of those that may have died in Thumnasragh prior to the building of the current chapel and adjoining graveyard in Moycullen in 1826, their remains may be interred in the tSean Reilig at Homefarm, or Teampeall Beag in Clooniff, where both burial grounds host a myriad of unmarked graves.

From the 1860’s the people of Thumnasragh were all of the interconnected Connell and Bohan families. By that time the population of the townland had declined as the land became less arable because of the construction of the Corrib River salmon weir in Galway. The weir, which acted as a seasonal dam and raised the level of Lough Corrib at times, made much of Thumnasragh subject to seasonal flooding and unsuitable for agriculture.

Instead of cultivation, most fields in the latter part of the nineteenth century were used for sheep grazing. Wool that was spun in Thumnasragh was brought to the Thorntons who were weavers in neighbouring Clooniff.

Eventually cattle replaced sheep grazing. The Bohans and Connells were also owners of Inchacommaun Island (Fly Island) off shore in Lough Corrib. The island had exceptionally good soil so potatoes, carrots and other vegetables were planted there. There was also sufficient hay for grazing and young cattle were swum over to it for the summer months. Due to its difficulty and danger, swimming cattle was later replaced by transporting them one by one in small boats.  From the northern most point of Inchacommaun in the 1950s, one could see across the short distance to neighbouring Hickey’s Island where some colourful religious statues were located on its shoreline.  The background history or significance to these statues has been lost over time.

As would be expected, the proximity of Lough Corrib had a major influence on the lives of Thumnasragh people.  At a time when houses didn’t have running water, locals obtained their daily supply in buckets from the lake shore or from a freshwater spring close to the Connell homestead.  In the 1920s William Connell built steps down to this well and surrounded it with a horseshoe shaped stone wall.  Fishing was a common past time and a source of supplemental income for some residents. Reeds, locally called scallops, found along the lake and in low lying areas, were collected and used to make baskets that were sold at market. Families would gather at night to make these baskets which were prized for toting turf and produce.

Families would often row boats across the bay to Curra where relations of the Bohans and Connells lived. Crossing the water was the shortest and quickest way to travel between Curra and Thumnasragh. Families from both townlands would travel to engage in meitheals at harvest time in Curra or for other activities in Thumnasragh. The Corrib would also provide the best access for the Connell’s and Bohan’s turf bogs located on the south-east side of the townland. A notch that had been dug out at the bog to dock the turf boats is still visible.

Small fields on higher ground in Thumnasragh were used to cultivate food for the families. Pigs were commonplace among the family farms. Surplus potatoes and cabbage were brought to be sold in Galway City on Fridays, where the Connells had several customers among the hotel owners and innkeepers in town. They supplemented their income by selling turf there as well. The most lucrative commodity to be sold from Thumnasragh were wild geese shot by local farmers. Geese sold in Galway would fetch a half crown, the same as the selling price of a load of turf.

Cultural Sites and Places of Interest

While there are no recognized historical or archaeological monuments in Thumnasragh, there are aspects of the landscape worth noting. A drainage canal built as part of the Lough Corrib and Mask Drainage Scheme, established by the Lough Corrib Act (1850), is located on the western periphery of the townland. This and other canals nearby in Moycullen and Killannin were constructed to drain lands adjacent to the Corrib and provide work for local people in the post-Famine period. Along the canal is the site of a bridge that once crossed it, part of an old road that led to the Corrib from Moycullen Castle. The bridge was destroyed during the War of Independence (1919-1921) by the Irish Republican Army (IRA) in order to deny its use by the Black and Tans and British Army soldiers who had a barracks at that time near Moycullen Castle.

Open fields in Thumnasragh were deemed possible landing places for German aircraft in World War I by British defense forces. Multiple long poles were planted in these fields to prevent landings both in World War I and during the Emergency (World War II).

Throughout Ireland over the centuries individual fields and gardens have been named. The origins of these names in some cases are obviously related to an owner, a use or a geographic or topographic feature. But for many others the origin of the names and the names themselves have been lost. Known field names in Thumnasragh include the following:

In future Moycullen Heritage has plans to map and publish these and the names of known fields and shortcuts throughout the parish.

Click here to view Photo Album of Thumnasragh and its People

Take your own tour of Thumnasragh below with Google Maps