As told by Michael Geraghty, Tullykyne, in 1937 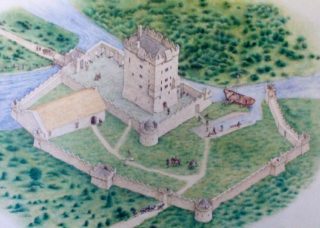 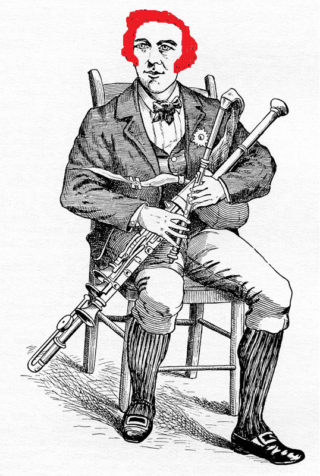 In the olden days, three or four hundred years ago, the O’Flaherties had a castle at Achadh na nIúr near Oughterard, and the ruins of that castle are there still.

I will tell you a story now to show you how hard-hearted and treacherous the O’Flaherties were.  They were Irish, as you know, but we have no reason to be proud of anyone who was as mean and as fiery and as cantankerous as the O’Flaherties from Achadh na nIúr.  You probably heard about the prayers that the English used to recite at that time:

Well, the O’Flaherties were very much against the O’Malleys, another Irish clan, who lived in Co. Mayo.  The O’Flaherties often invited the O’Malleys to Achadh na nIúr where they wined them and dined them, but it wasn’t always for the good of their health that they did it.

On one occasion a messenger was sent to the O’Malleys inviting them to a banquet in Achadh na nIúr and the O’Malleys accepted the invitation graciously.  On the appointed evening O’Malley, his wife and their two children, accompanied by a few bodyguards came in his chariot drawn by four horses.  They travelled through Westport, Leenane and on to Oughterard, arriving at Achadh na nIúr by night-fall.

O’Flaherty welcomed them most cordially into his place.  They were seated to table and the best of drink and food was placed in front of them to restore their energy after their long journey all the way from Umhall Uí Mháille.

They were scarcely finished when a travelling red-haired piper called to the castle; his pipes under his oxter and a little dog as a companion with him.  He addressed the people of the house and he was made welcome.  He was seated to table and he partook of the hospitality.

Shortly afterwards O’Flaherty said to O’Malley that he would show him the rooms of the house, so that he could boast that he had been feted in the best castle in Ireland.  O’Malley and his wife said that they would love to be shown around.

Off they went on their tour: in to one room and out again: into another room.  It was a big castle and they were getting tired.  In each case O’Flaherty would enter the room first, and his two guests would follow him.  On coming to the last room, however, O’Flaherty stopped and bent down to tighten his shoe-lace but he bade his guests to proceed before him.  O’Malley was just about to go ahead, followed by his wife, when the little dog of the red-haired piper ran in before them.  A trap-door in the floor instantly opened and swallowed him.

When O’Flaherty saw what had happened he called out urgently.  “O’Malley, my friend, take care!  I forgot about this floor!  How lucky you were!”

O’Malley looked him straight in the eye, anger coursing through his veins, but O’Flaherty showed such contrition that O’Malley thought it may have been a mistake, and he said nothing.

Then, O’Flaherty showed the O’Malleys how the trap-door worked.  There was a large flagstone, almost as large as the whole floor, with an axle in the centre, and when one stepped on it, it lowered, and the other side lifted, tossing whoever was on it into the deep waters below that flowed in under the castle.  Whoever, or whatever, fell in has no escape.

merrymaking and the mystical musician

When they had finished their tour, O’Flaherty guided his guests to the reception hall where a big group had gathered, singing, dancing and merry-making.

The O’Malleys started to dance and O’Flaherty did likewise.  It was turning into one of the best nights ever of entertainment.  The red-haired piper, whom nobody knew, was playing away on his uilleann pipes to his heart’s content.  Who was he?  Where did he come from?  Why did he come?  Did he know that it was a special night, that the O’Malleys were invited?  That they had come in their coach and four?

As day was breaking, O’Flaherty went out to his guards and whispered in their ears that an enemy was present in the castle: the O’Flaherties worst enemy.  The man who had done most to defile and defame the O’Flaherties of Achadh na nIúr.  He put it to them that he, and they, would be failing the O’Flaherties before him, and more so the O’Flaherties who came after him, if, this day, this treacherous person was allowed to escape.

But the red-haired piper saw O’Flaherty go out, and he knew too well what he was up to, but he continued to play his music.  But he did whisper in an ear: in the ear of one of O’Malley’s guards and he advised him to immediately prepare the coach and horses for the road.  He saw O’Flaherty’s manoeuvres in the yard and he knew full well what they meant.  He started to play an old Irish tune, and, at the same time, to sing an Irish song.  The tune he played, An Dord Féinne, was the one that the Fenians of old used to play when danger was nigh.  The song he sang had those lines in it:

“There is no sadder sight
than the sight of a man amongst enemies;
he happy and drunk without spite,
but they full of hostilities”

When O’Malley heard the tune and the song he understood their meaning; and he immediately recalled the earlier incident.  He divined that, indeed, the invitation seemed less propitious.

The piper played on.  Everyone was touched by the power of his playing.  O’Malley beckoned discreetly to his wife and to his two children to follow him.

They went out.  The coach and four was waiting for them.  O’Malley tore up an old blanket he found in the stable and wrapped it round the hooves of the horses.  Then they quietly commenced their journey.  Once they passed Oughterard they discarded their caution and travelled faster.

Meantime, O’Flaherty was at the opposite side of the castle preparing his guards to ensure the O’Malleys could not escape.  Men with knives and swords were receiving their instructions.

Preparations completed O’Flaherty went back in, intending to entice the O’Malleys to their death.  But, instead, he received the news that they were by then well on their way home to Umhall Uí Mháille.  His wife informed him as to what had happened: how the red-haired piper played ‘An Dord Féinne’ and how he had sung a particular song.

O’Flaherty was enraged.  Then, the search for the piper began.  O’Flaherty spoiling for the piper’s head so as to make an example of him for all other pipers, but he, too, was gone.

the pirate queen of the fairies

There was a wise old man, a fortune teller, present who informed the company that the piper was a fairy-piper from Cnoc Meadha.  That a beautiful girl, Grace, of the O’Malley clan from Umhall Uí Mháille, who was then the queen of the fairies in Cnoc Meadha, had sent the piper to Achadh na nIúr to save the O’Malley chieftain and his family.  For she knew that O’Flaherty wished to kill him so that the O’Flaherties would rule over all the lands from Bangor Erris to Killary Harbour and further afield.

O’Flaherty got his horsemen ready, swords and all, for he wanted to pursue O’Malley.  And they set out.  But to no avail.  Because, by then, the O’Malleys were safely in their own territory.

a step too far

O’Flaherty was furious and he decided never again to admit any piper to Achadh na nIúr, even though it was the custom at the time never to refuse hospitality to travelling musicians or entertainers because they commanded great power.  The power to compose popular songs.  The power to satirise, to ridicule, to destroy.

He would not refuse them entry, but he would design a plan to ensure their destruction.  A deep river flowed in front of the castle through which those entering on foot were obliged to come.  It had no bridge but had a stone pathway, slightly submerged.  A straight path that people who knew it had no trouble with.

O’Flaherty decided to change the way of the path by putting a curve or twist in it.  Unwanted strangers would drown.

The first night of the new path who would call but an old piper.  A regular.  He left his cold hungry wife and family out at the gate, waiting for him to bring them out good food, for that was the custom, they were always given aplenty.

The submerged path did not bother this visitor, he knew it, he had walked it often.  But not this time.  He fell in and was drowned.  His body was later found at the bottom of a deep pool.  That pool or hole is still called Poll an Phiobaire (Pipers Hole).

the curse of demise

His wife grew impatient waiting for her husband to return so she decided to look for him.  Only to find his body.  She started to cry and to keen him. On finding out what had happened she cursed the O’Flaherties.  Wishing their demise.  The they would have no children and that the O’Flaherty clan would cease to exist in Achadh na nIúr twenty years from then.

Her invocation was answered.  The O’Flaherties had no offspring.  The old family scattered.  The castle became derelict.

That’s my story for you now and it is a true story.