The Game of Conkers 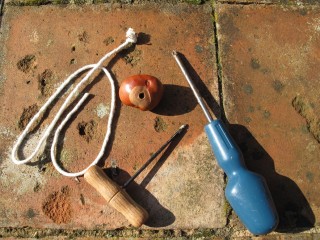 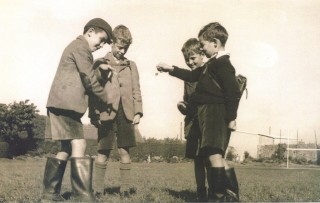 1953 photo showing Frank Peters (left) who has just made a strike on Eamonn Ashe’s conker as Paul O’Flynn and Eoin Ó Dochartaigh look on. This is one of the many images in a book “The Jes, 150 Years of the Jesuits in Galway 1862 – 2012”
Photo Credit Kennys Gallery

In the days before television, computers or ipads, children often had to be inventive to amuse themselves. When it came to street games they were well able to use their imaginations as they played games like Jackstones, O’Grady Says Do This, Tops, Queenie Queenie, Rover red Rover, One Two Three Redlight, Jack Jack Show the Light, London bridge is Falling Down, Cad, Skipping, Hobbies, Marbles, Slides (in Winter) to name a few. Another traditional seasonal game, usually played in September, October and November was ‘Conkers’ using the seeds of horse chestnut trees. The term conker applies to the tree as well as the seed and there are several theories as to where the name came from. The nut is found in a prickly case which falls from the tree. It is drilled using a nail, sometimes a compass (be careful not to stick yourself !), and then a piece of string is run through it with a knot tied at one end to secure the conker.

The game involves two players, one holds the conker perfectly still at the height which the opponent chooses .The opponent then draws back his one to strike the other. Some favour the over arm swing where the conker comes down vertically, others go in from the side or diagonally thinking it easier to go against the softer part of the nut —- the side slash, the forward side slash or the backhand side slash. The conker which breaks the other gets a point, and the hardest one usually wins.

The scoring is very important, a ‘none-er’ is one that has not conquered any, a ‘one-er’ is one that has beaten one, a two-er is one that has beaten two etc. The victorious conker assumes the score of all its victim’s former foes, so if your conker is a one-er and beats a nine-er, yours then becomes a ten-er. If your opponent misses, he gets two further goes. If the strings tangle, the first player to shout “Snags” or “Strings” gets an extra shot. If you dropped a conker, the opponent could shout “Stamps” and jump on it, but if you shouted “No stamps” quickly enough, then the stamping was disallowed.

the secret of a formidable conker

Roald Dahl once said “A great conker is one that has been stored in a dry place for at least a year. This matures it and makes it rock hard and therefore formidable”. This conker was known as a ‘seasoner’. Some went to great lengths to harden their conkers …. if you put them in water the ones that floated on top were no good, those that sank were heavier and harder. Some soaked them in vinegar, others baked them in the oven or left them on a ledge up the chimney.