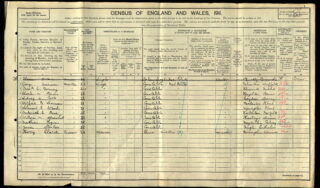 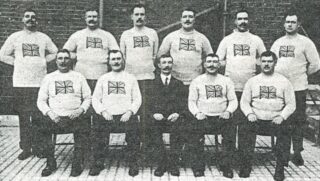 Aged 18, he was residing in Gortmore with his mother and siblings, (Patrick, Flan, Michael and Margaret) – his father James having passed away sometime between 1886 and 1901.   Further siblings John and Mary were not mentioned on 1901 census at Gortmore.

Before joining the police force in England, website https://www.sports-reference.com/olympics/athletes/hy/matt-hynes-1.html mentions that Matt served with the Royal Irish Constabulary and was a member of the Ballyshannon district tug-of-war team.  To date we have been unable to find any records to substantiate this claim.

Tug-of-War was a sport which was part of every Olympics from 1900 to 1920, but since discontinued like several others such as croquet, cricket and jeu de paume (now known as real tennis).

In 1912 the planned Tug-of-War 10-match round-robin tournament was to include teams from Sweden, Great Britain, Austria, Bohemia and Luxembourg.  With several of the teams failing to appear, the competition in the end consisted of a single match bout on 8 July 1912 between the Stockholm Police representing Sweden and the defending champions City of London Police representing Great Britain.

The bout consisted of a best-two-of-three contest.  In the first pull, the Swedish team steadily pulled the British squad across the center mark. After a five-minute break, the second pull was started. In this one, neither team gained the victory through pulling the other across the line, but after a prolonged stalemate a couple of the London men succumbed to exhaustion and sat on the ground, disqualifying them and giving the Swedes the victory.

Matt and his teammates as a result took home a silver medal – Matt’s was the fifth and last Tug-of-War medal won by Irish born competitors in the 1908 and 1912 games.

Matt died a batchelor, at the young age of 43, on 9 March 1926 in St Thomas’ Hospital, Westminster Bridge Road, Surrey.  His home address at time of death was 46 Lansdown Road, Canning Town, London, Essex.

‘The Little Book of Irish Athletics’ by Tom Hunt