Not just one of Connaught’s best, but one of Ireland’s. 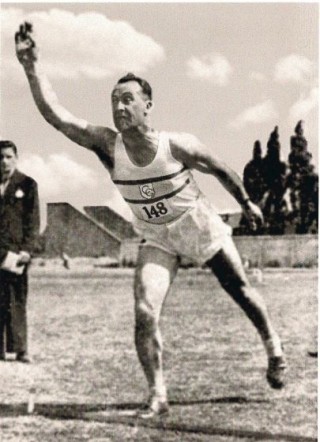 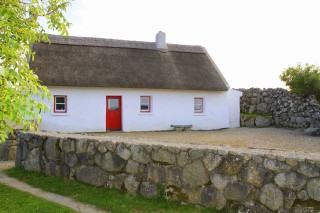 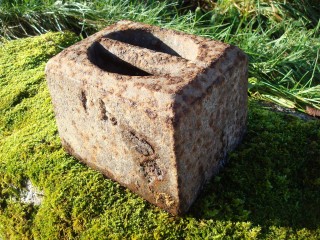 It is doubtful if Moycullen has produced a finer athlete than Michael O’Hehir. Holder of the world record of 29’2” throwing the 56lb, without follow, as well as 13 All Ireland gold medals. Michael was born in Knock on 18th February 1918. He was the oldest of four boys and four girls.

Michael’s sister Annie, who was born in 1928, married William Connell, deceased, and now lives in Tom na Sraith, An Taobh Mín, with her daughter Mary. It is as far from Knock, An Taobh Garbh, as is possible within the parish boundaries. I spent a lively and entertaining morning there recently with Annie and Mary and were joined by Michael’s son Mick from Ballinasloe. Annie could not have been more welcoming and entertaining as she told stories, laughed, cried and sang. She started by regaling me with a verse of ‘Anach Cuain’ before I even sat down. It was an appropriate song for one who had lived most of her life beside the lake. She had stories about primary school in Leamhchoill, which she most thoroughly disliked. About her grandmother Máire Ní Scanláin who she idolised. Margaret Conroy, another granny was a big favourite. She talked a lot about her Uncle Joe and the intimidation he suffered during the ‘troubles’. It was obvious that the bitter politics of her youth left a deep impression on Annie.

“Did you know my Uncle Tommy Joe” I asked. Scairt sí. “Did you know he stood for Tom Hanley” she asked as she doubled up laughing. “They had no one got and he was passing so they called him in”. No better man, I thought. She followed up that piece of priceless information with a verse of ‘An bhfaca tú mo Shéamaisín’.

Bhi an mheas go deo aice ar mhná rialta an Spidéil, áit a bhfuair sí bliain scolaíochta. Her sister Mary went to school in Mountmellick, but died in her forties. Margaret (Conneely) lived in Baile an Domhnalláin. Tim still lives, aged 90, in Chicago. Joe who lived in Ballinasloe, Julia in Chicago and Sean in Scotland were the other siblings. She fondly recalled her close friend and confidante, Annie Donoghue née Hehir, in Corrach to whom she rowed across the lake.

“An raibh capall agaibh?” a d’fhiafraigh mé agus fios maith agam. “Neart acu” are sise. A big Clydesdale, bought in Athenry for the heavier work and a pony for the trap. “Agus an túirne ag mo mháthair” she recalled.

regular cycle from Ballinasloe to home and back in one evening

Michael was the oldest and left home, aged 20, to work as a psychiatric nurse in St. Brigid’s Hospital in Ballinasloe. Shortly after starting his new job his father died suddenly and Michael cycled home regularly after work until the turf was saved that summer, returning to Ballinasloe on the bike in the dark so as not to miss work the following mornings.

Powerful and athletic he represented his adopted parish in GAA and rugby but it was as an athlete that he made his name. Though he started on the track, it quickly became apparent that he would excel in the field events, specialising in throwing the half hundred. This involved two disciplines. In the first, the thrower lined up to a set mark and threw the weight without allowing either foot to follow through past the mark as he released it. This was known as ‘without follow’. The second discipline entailed standing under a moveable bar and throwing the half hundred over it. This was referred to as ‘over the bar’. “The 56lbs over the bar is the most arduous of all athletic events, and for an untrained man, perhaps the most dangerous…… there is a tantalisingly elusive art in bringing the weight, handle and all, over the lath at the last fraction of an inch that a man can reach”.

The sports meetings of the post war years attracted as many spectators as many an inter-county game nowadays, and crowds of three and four thousand were common. The weight throwing events were major features and Michael built up a huge personal following with fans all over the country. He often won the best all-round athlete of the meeting and usually won the slam of 56lbs, discus and shot putt. Up and down the country beside cowsheds and at gable ends, young men marked out ten paces, threw their half hundreds and marvelled at Michael’s prowess.

In the magazine, The Pioneer, in 1951, his other best performances were listed as follows:-

The same article described him as being six foot three and a half, seventeen stone and ‘a Gaelic speaker from the cradle’. He was variously described in the press as ‘the Moycullen born giant’, ‘the gigantic Michael Hehir’, ‘the herculean Michael Hehir’, ‘of handsome and powerful physique’. And again ‘the crowd of three thousand cash customers focussed their attention on the handsome Connaught giant’. At the NACA sports in St. Coman’s Park, Roscommon, we are told that ‘he slung the 56lbs over the bar with effortless ease. After each effort and success, he was enthusiastically applauded. He demonstrated the use of skill combined with strength with the different throws’. In an article ‘Giants – Past and Present’ in ‘The Sportsman’ 1955, William Dooley wrote ‘Michael O’Hehir now domiciled in Ballinasloe, is from Moycullen where the famous Galway runners of a bygone day, John Joyce (American 10 miles flat champion 1903, 1904 and 1905; 5 mile flat winner of 1904 and American senior cross country title holder of 1903) and Tom Hynes (international cross country runner-up in 1905) first saw the light of day. O’Hehir is the best made of all the bigger men in Irish athletics today, his strength and power so extraordinarily well distributed’.

Michael married Inagh Tooher from Killimor and they had one son Mick – a bit of a handsome giant himself. Mick is now retired and rebuilds vintage cars but was a renowned sportsman in Ballinasloe in his day. He is immensely proud of his father’s achievements and of his unique haul of fabulous trophies which includes over twenty All Ireland silvers as well as the thirteen golds. Because of a long running split in Irish athletics, the NACA athletes were barred from international competition. Had they not, it is likely that an Olympic medal would be included in the collection. In 1967 the conflicting bodies, the AAU and the NACA, came together to form the Bord Lúthchleas Éireann (BLE). It was the year after Michael retired. Iggy Ó Muircheartaigh, former President of NUIG, captained the first BLE international athletics team. He had been with the NACA and was the Irish record holder for the 100yds in 1964, 1965, 1966 and 1967 and the first Irishman to run under 10 seconds for the distance at 9.8.

Michael, like his son, was keen on speaking Irish at every opportunity and an enthusiastic member of Conradh na Gaeilge. He once appeared on R.T.E. with his relative and broadcaster Breandan Ó hEithir discussing strategies for the promotion of Irish in Ballinasloe.

The family home in Knock was sold many years ago to husband and wife, Dearbhla Standún and Charlie Troy, and is now a retreat centre called Cnoc Suain. Dearbhla and Charlie have preserved the field, called ‘An Corrach’, where Michael practised – now a copse of alder trees. They are also in possession of one of his half hundreds. Happily, Dearbhla and Charlie are well aware of Knock’s sporting heritage. It is interesting to note that the southernmost townlands in An Taobh Garbh were renowned at the beginning of the 20th century for their cross country runners and names like Hehir, Carter, Keady and MacDonagh ran with Tom Hynes for the Galway Harriers. While Michael would have been aware of this, and may even have been inspired by those early runners, he is more likely to have drawn his inspiration from the legendary Dr. Pat O’Callaghan who won two golds in the hammer at the Amsterdam Olympics in 1928 and the Los Angeles Olympics in 1932. This was before the split that would deny Michael his opportunity.

Sadly, Michael died in his early 50s. He won his first Connaught championship in the 100yds in 1939 before concentrating on the weights, where he gained his national reputation. At the age of 45 in 1966, he won his 150th championship trophy with a discuss throw of 130’ 7”. By then others like Joe Sammon and Sean Purcell had taken Michael’s place in the popular imagination.