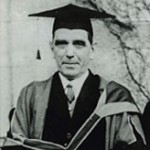 Tomás Ó’Raghallaigh was born in Leitir Fhraoigh (more commonly called Loughwell) Maigh Cuilinn in May 1883. His father was Seán Ó’Raghallaigh and his mother was Máire Ní Loideáin from Spiddal. They raised a large family through the medium of Irish. He was educated in the primary school in Moycullen, progressed to St Josephs (The Bish) in Galway and he attended St. Patricks teacher training college in Dublin. After he qualified he spent a time teaching in Dublin but he moved from there to Carlow and then to Achill.

A co-founder of Scoil Acla

In Achill he taught in the national schools of Achill Sound, Saula, Dooagh and Dookinella. It was during this time in Achill he helped establish Scoil Acla, the summer school which he was responsible for naming. While teaching in Achill he met his wife Máire Sineád Ní Challanáin, also a teacher, they raised five children. In 1911 he got a job as a muinteoir taistil in Mayo.

Tomás became an organiser for the Galway Gaelic League in the early 20th century and was a regular contributor to An Stoc, the Irish monthly paper, which he edited with Tomas O’Maille. With Padraig O’Domhnallain, he wrote a series of short stories which were published under the title Bruth-Fa-Thiar.

External examiner for Queens and UCC

Later he got a job in Co. Galway teaching in St Josephs while his wife taught in The Claddagh. He attended UCG and qualified with a BA. MA and Ph.D. He was a professor in Tourmakeady, Pearse College, Rosmuc and Colaiste Chonnacht in Spiddal. He later became Professor of Irish at UCG as well as being an external examiner in Irish for Queens University Belfast and UCC. He died on the 26th of January 1966 and is buried in Galway.