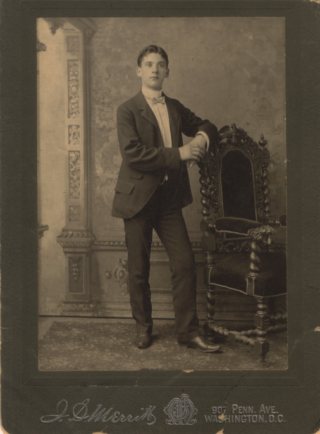 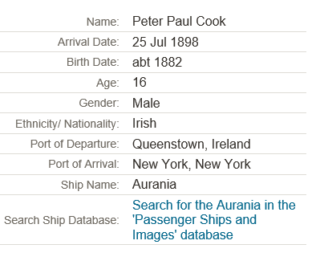 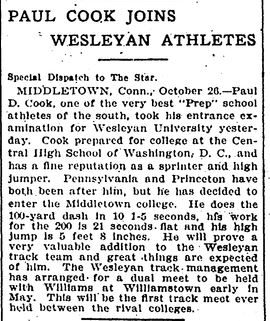 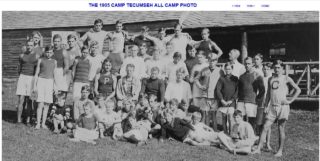 One of these men is Paul Cook, possibly the young man with C 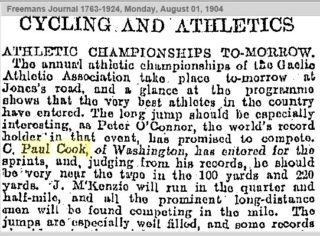 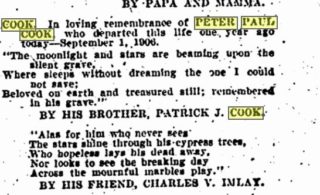 Peter Paul was the youngest of 13 children. Peter Paul, was known as Paul Cook in America.

immigration to the USA

In 1898 Peter Paul emigrated to America on board the SS Aurania. He travelled alone. The Cunard Line SS Aurania departed from Liverpool on the 15th June, arriving in Queenstown (Cobh) on June 17th. He arrived in New York on 25th June.

In the 1900 US Census Peter Paul is listed as living with his brothers Patrick Joseph and Richard and his sister Ellen (also known as Nellie or Helen), Patrick’s wife Mary Ellen and their children Helen, Annie and Martin at 3124 M Street N W. Georgetown, Washington DC.. Patrick Joseph Cook was a Bar Keeper and his brother Richard was a Bar Tender and Peter Paul (Paul) was listed as a Day labourer.

“Paul Cook was the star performer of the day”according to The Evening Star of 26th May 1904. Paul added 18 individual points to Central High School winning score of 60. On the day Paul broke the running broad jump record by clearing a distance of twenty-one feet and two inches. This was done on his first trial. In the Relay race, the Central High School boys ‘quickly distanced all the competitors, and Cook taking up the running in the last lap, won the event by half the distance of the circular track’.

home for the race

An article in The Freeman’s Journal of 1 August 1904 shows that Paul returned to Ireland and competed in a meet at Jones Road, Dublin. “The annual athletic championships of the Gaelic Athletic Association take place tomorrow at Jones’s Road, and a glance at the programme shows that the very best athletics in the country have entered. Paul Cook of Washington has entered for the sprints, and judging from his records, he should be very near the tape in the 100 yards and 200 yards”.

Paul attended Western High School where he was a Track & Field athlete. During his 3rd year, he had a sudden illness, this may have been the onset of TB. Paul spent the summer of 1905 at Camp Tecumseh, in the White Mountains of New Hampshire. In his 4th year he transferred to Central High School. In September 1905 Paul entered Wesleyan University, Middletown, Connecticut. In an article in The Evening Star of 25th Oct 1905, they describe Paul Cook as “one of the very best “Prep” school athletes of the south” and “has a fine reputation as a sprinter and high jumper. Pennsylvania & Princeton Universities have been after him, but he decided to enter the Middletown college.”

On the night of 1st March 1906, the dormitory caught fire and burnt to the ground. 85 students were left wet & cold. It is believed this re-triggered the TB. Paul was hospitalised in Middletown for 8 weeks, he then went to convalesce for 2 months with his sister Della (Cooke) Dowd of Lowell, Massachusetts. In July he returned to Washington DC. A trip to North Carolina was the final attempt to cure Paul, but sadly to no avail.

Paul passed away peacefully at his home on 1st September 1906. Paul is buried at Mount Olivet Cemetery, Washington D.C.

What a tragedy, to have lost such an amazing talent at such a young age.

I must thank my cousin Martin Grealish, Chestnut Hill, MA for some of the information.