You are here: Home>topics>Judge William Patrick Madden: From Killagoola to Kansas

Maddens from Moycullen who Became Pioneers in the American West 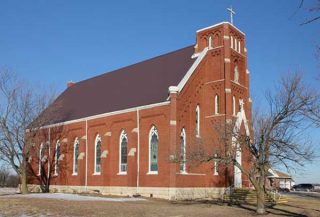 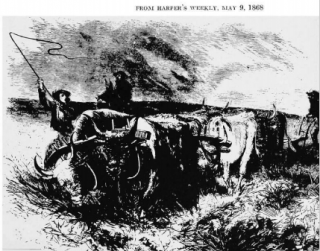 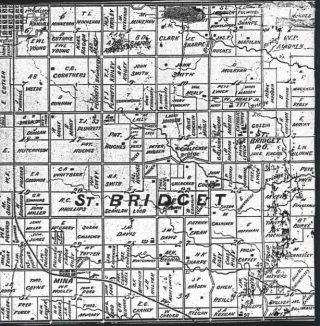 Travelers passing the broad expanse of open prairie in the American State of Kansas are often struck by the sight of large churches visible for miles and seemingly in the middle of nowhere. One such that still stands today is St. Bridget’s Roman Catholic Church in Marshall County, Kansas. It sits alone amid fields of grain, miles from the nearest town. But when it was established in 1859, St. Bridget’s was the center of a thriving Irish farming colony named after the patroness of Ireland and  founded by a man from Killagoola, Moycullen: William Patrick Madden.

Why the Irish in American Cities?

It is well known that most Irish emigrants in the 19th century settled in the large cities of the United States, among them New York and Boston, and especially for Moycullen people, Washington, DC. Still, as one commentator wrote in Donohue’s Magazine in 1880: “It’s always seemed strange to every thinking person why the Irish, who at home are the most agricultural people in Europe, should be so fond of settling in the cities of America”.

As Irish immigration surged in the 1850s influential Irish Americans began efforts to encourage Irish settlement of the newly opened lands west of the Mississippi River. Thomas D’Arcy McGee, a leader of the Young Ireland movement before fleeing to the United States in 1848, was one of these. In 1856 he convened a conference in Buffalo, New York with over 100 Irish leaders from the United States and Canada to consider where agricultural colonies could be viable and examine the ways and means of settling these emigrants. Over the next 30 years, various organized efforts would result in the establishment of Irish agrarian colonies in Minnesota, Nebraska and other Plains states.

St. Bridget however was distinct in that it was not the result of an organized colonization scheme; rather it sprung from the adventurousness of a Moycullen emigrant and some of his immediate and extended family and acquaintances.

A Son of Moycullen joins the American Army

William Patrick Madden was born in Killagoola, Moycullen on February 10, 1825, the son of Patrick Madden who had come from Drimmavohaun and appears to have married Honora, daughter of one of the Killagoola families. Family lore had it that the Maddens had come to Moycullen from an area southeast of Loughrea in the late 18th century and settled in the uplands of Moycullen. Later branches of the family migrated closer to the shores of Lough Corrib. Indeed, Blakes’s Census records Maddens in the mountainous Drimmavohaun and Knockaunranny townlands with other families in Ogool and Tullokyne.

William Patrick was likely the oldest son in his family. He is said to have had some education in Moycullen as a young man. With the death of his father in 1849 and limited prospects in a homeland ravaged by famine, Madden left for America around 1850. Arriving in New York he soon enlisted in the United States Army and joined the 6th Infantry Regiment which at that time saw action on the frontier in Kansas and Nebraska. For five years Madden served as a patrol scout contesting control of the Plains with Native American warriors.

Serving under General William S. Harney, Madden’s most notable military engagement was in the controversial Battle of Ash Hollow in 1856. Ash Hollow was the defining conflict in a short war between the United States and the Brule Sioux tribe. The battle, resulting in the deaths of 86 Sioux, (about half of whom were women and children), was the tragic consequence of the theft of a cow, the killing of the alleged Native American thief, and a retaliatory massacre of 30 American soldiers.

Details of Madden’s role in the battle are unknown but by 1856 his time in the army was nearing its end. Several years earlier on a furlough from Fort Leavenworth, the army headquarters, Madden had come across some heavily forested land in northeastern Kansas. In 1851 he filed a timber claim for 160 acres in northeast Marshall County.

Prior to 1854 Kansas had been governed by the United States but was considered “Indian Territory”, closed to settlement by those of European ancestry. With organization of the territorial government in that year, settlers were allowed to claim up to 160 acres which would be granted to them after 5 years of occupancy and improvement of their homestead. After leaving the army, Madden and several other settlers from Galway and adjoining parts of Connaught made their way to Marshall County and staked their own homestead claims. Among these early pioneers were a relation, Lawrence Madden who with John V. Smith was from Derrybrien, County Galway, and Patrick Hughes from Tuam, County Galway.

The land these settlers found had potential: the moderately hilly terrain was broken by a series of creeks and much of it was timbered; although rocky (not unlike the land they knew back home), the limestone they found had commercial value. Once cleared the land produced abundant broadleaf grasses and within a few years the area would be known for the high quality and quantity of cattle produced there.

A Difficult Life for Pioneers

Promotional pamphlets addressed to the Irish living in crowded Eastern cities made life on the Plains sound idyllic as in this one:

If a man comes West in the spring he builds himself a small house of sods or cottonwood lumber. He then plows a few acres and plants corn or potatoes in the sod. His cow is staked in a rich bottom, his patch of green vegetables grows in front of his door, and four months after his arrival at his new home he is home indeed, with food growing on his own farm for his family and his cattle.

It is hard for us to realize now the conditions under which they lived………they had none of the farm machinery of today: the sod was broken with a spade, corn was planted with a hoe, grain was cut with a scythe, gathered by hand and thrashed with a flail…..Many of the earlier settlers found it impossible to make a living here under such conditions and went back to the (Missouri) river from time to time and worked on the steamboats or as common laborers in the city

The younger Madden went on to describe how life improved as more settlers came to the area. Together old and new pioneers would gather to have “working bees” where they would build each other’s houses and clear away their fields. These working bees were notable as they were a tradition brought to Kansas from Ireland, where they were known in Irish as meitheals. By 1859 there were sufficient Irish settlers to warrant a Catholic church, built of logs and named by the bishop of Kansas City, St. Bridget, in recognition of the parishioner’s nativity. Soon St. Bridget became the name for the entire community and the township in which it was located.

When Kansas entered the Union in 1861, William Madden became the first Probate Judge of Marshall County, a position of prominence he would hold for many years. Judge Madden also had a strong interest in public education and was instrumental in establishing a public school adjacent to his ranch in St. Bridget in the 1860’s (this at a time when public education was almost a luxury in the rural Plains states).

Madden married Catherine Rogers from Castlerea, County Roscommon, in 1864 and together they would have 11 children. The family prospered through the late-19th century and would have the good fortune of becoming what some called at the time “lace-curtain Irish” (Irish immigrants so-called who had done well for themselves and could afford lace curtains for their homes). The wedding of the Madden’s daughter Nora to Charles Wuester in 1893 made the front pages of all the local newspapers. Reports noted that Nora Madden “stands high in the social circle of this community” and the wedding reception at the Madden’s “palatial home” was described in tremendous detail right down to the listing of the couple’s wedding gifts and from whom they were given. Among these were six head of cattle, silver serving sets and of course, lace curtains.

Early in the 1860s Judge Madden was joined in St. Biddy’s (as it was sometimes called) by his younger brother Mark Madden from Killagoola and cousin Margaret, from Drimmavohaun.  The 1862 Homestead Act, whereby settlers could claim up to 160 acres of land enabled the Maddens and other Irish settlers to acquire tracts of land the size of which would have been unimaginable to their family and neighbors in Moycullen. Judge Madden’s ranch ultimately was to be more than 600 acres; Mark Madden eventually acquired 200 acres and Margaret Madden, who had married a distant Madden cousin, lived on a homestead of 160 acres across the state line in Wymore, Nebraska.

The period from 1890 to 1910 was one of transition for St. Bridget. In November, 1895 while driving his wagon to Summerfield, a nearby town, it overturned and Judge Madden was killed instantly. As eulogized in the Marshall County News:

“He came here poor but by industrious and frugal habits had acquired a handsome competency. His life has been a laborious and eventful one and he will be greatly missed in the community”

He was buried in the Madden family cemetery on the ranch that he had homesteaded so many years before.

Less than a month previous Judge Madden’s brother Mark had died after a long illness. Mark’s death led to the arrival of the last of the Moycullen Maddens to St. Bridget.

Mark Madden never married and shortly prior to his death he had deeded his 200 acres to be divided between his niece and nephew in Moycullen, James O’Toole, the son of his sister Bridget Madden O’Toole and Maggie Folan, daughter of sister Margaret Madden Folan. Both came to Kansas to collect their inheritance after Mark’s death. However, a local cousin Terry, son of Judge William Madden, (the same mentioned earlier) produced a will showing himself as Mark’s sole beneficiary. After a complicated five year legal battle that went to the Kansas Supreme Court, Maggie prevailed and gained her inheritance. She had married a local man, James Hughes, from Ireland shortly after she arrived in Kansas in 1897. As with many families during this time, Maggie and James eventually left for other “greener pastures” in Kansas. James O’Toole ended up selling his acreage to his cousin Terry and returned to Ireland.  Cousin Terry would become a prominent attorney active in political circles in Kansas City and would continue to manage the Madden Ranch until his death in 1940.

An Extinct Town but a Monument to the Irish

The vitality of the St. Bridget community peaked in the years after the death of the pioneer Maddens. By 1905 there were 89 farm families in St. Bridget and a new red brick church was constructed. Funds for the construction ran out and the church was built without a steeple.  By the 1930’s many of the families of St. Bridget had left, victims of the economic depression and the drought and dust storms that plagued Kansas during that time. The church was closed in 1967 and was given to a group of local people, the St. Bridget’s Historical Society and since 1996 the church has been listed on the National Registry of Historical Places.

St. Biddy’s is now a considered an “extinct” town. Gone are the convent, the school, the parish hall, the general store, the houses and other buildings that had been St. Bridget. But today out in the plains of Kansas these monuments to the hardy spirit of Irish settlers stand tall: the imposing brick St. Bridget’s Church; the nearby St. Bridget’s Cemetery, the final resting place of hundreds of Galway people and their families and of course, the Madden Ranch with its tomb of William Patrick Madden, the adventurous Moycullen man who started it all.