You are here: Home>topics>Launch of Moycullen Pony Trekking

A 1967 initiative of 'Save the West' campaign 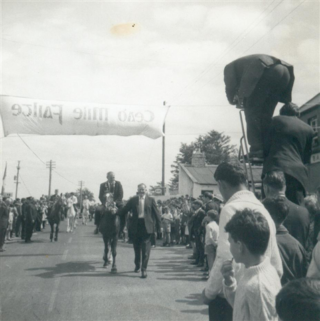 The opening of Moycullen Pony Trekking, 18 June 1967, with RTE Camera on the right. The horse which belonged to the Lord Mayor of Galway, Brendan Holland, being led by Joe Cunningham. The rider was Mouse Morris, son of Lord Killanin who performed the opening ceremony.
Photo courtesy John Cunningham 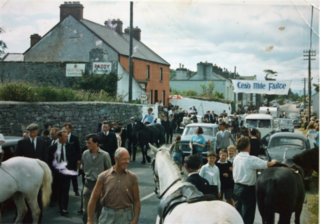 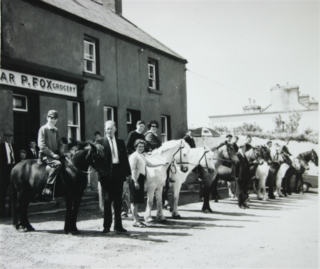 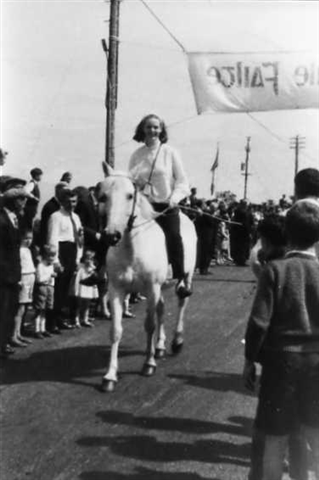 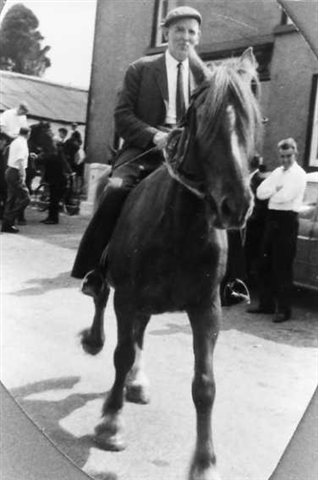 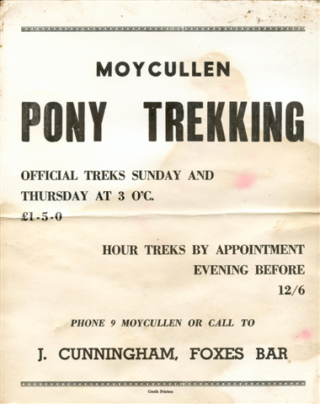 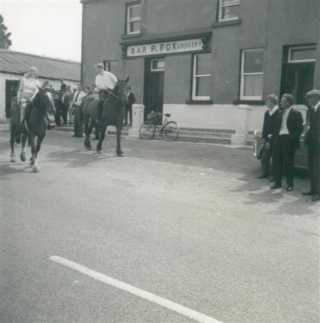 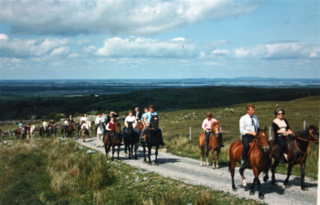 Sunday, 18 June 1967, spirits were high and the street of Moycullen was awash with locals, visiting dignitaries, ponies and RTE cameras….. all for the inauguration of a new pony trekking service which was to be operated in conjunction with the Farmhouse Holiday Scheme in association with the Save the West Campaign.

Some months earlier, at the invitation of Jim McKiernan Chairman of the local Muintir na Tíre group, the Very Rev. James Canon McDyer (1910-1987) travelled from Glencolmcille in Donegal and addressed the people of Moycullen at a meeting in the church.  McDyer was a catholic priest and campaigner for the rights of disadvantaged and underdeveloped rural areas of Ireland.  He championed the rights of rural people to forge their own destinies and emphasized the importance of small community-based industries which developed local resources and skills.

The trekking venture was to operate for several years, firstly from buildings beside Cunningham’s Fox’s Bar (Kylebroughlan) and then from the Clancy homestead on the Spiddal road (Gortyloughlin).  Mairtín Clancy, who had started out aged 12 as a guide on the trek, bravely took on the running of the service only two years after, aged 14, and therein started his love of horses.

Post these covid restrictions, we look forward to meeting up with Mairtín to document the many stories he may have to tell about the Moycullen Trekking Ponies and how they ‘Saved the West’, so watch this space.  In the meantime, here is an article outlining the event, which was posted on page 12 of the Connacht Tribune on 23 June 1967

The service was launched by Lord Killanin, President of the Connemara Pony Breeder’s Society, and Very Rev. G. Quinn, Parish Priest, who presided at the ceremony, said as part of the tourist development they planned to organise package holidays for Irish family groups in Britain.  Very Reverend Father Quinn said what they were trying to do was revive the countryside of Ireland so that it would be a better place in which to live.  It was not only a question of economics because social happiness was also important so that the people would be happy in their own countryside with all the amenities of the city.  Their Farmhouse Holiday Plan was unique in that they would be bringing back Irish families for two weeks on a package basis so that they could renew their association with the homeland.  The pony trekking was also unique in that it was on a co-operative basis, with the local farmers providing the ponies and it would be operated on Sunday and Thursday each week for a start.  The route would be via Drimcong and the Spiddal road.  He congratulated the Connemara Pony Breeder’s Society on their good work for the ponies and said those taking part in the treks would see the ponies in their natural habitat.  He thanked Lord Killanin for coming, saying that while he lived in Dublin his heart was in the west.
Lord Killanin recalled that people had lived in Moycullen for thousands of years before the time of Christ and the treks would be going through an historic land.  The area had made a valuable contribution to the Christian culture of the west.  He recalled his own happy and close family associations with the area and said the Connemara Pony Breeder’s Society welcomed the venture particularly because it was on a co-operative basis.  Moycullen was Connemara and he recalled that Horace Plunkett, the founder of the co-operative movement, had visited the district in the past.  He congratulated Father Quinn and all his helpers and pointed out that if the ponies were not being supplied by the farmers it could only be done by a riding school and would have to be established at big capital cost.
The Mayor of Galway, Mr. B Holland, joined in the good wishes and congratulations and said the occasion had special significance because it was time for a merger between town and country.  The countryside would have to share in the prosperity of the cities and towns.
Mr. A. Sharkey, County Manager, said pony trekking had been very successful in other areas and there was no reason why it should not be equally so in Moycullen.  The only way to attract prosperity to the west was by co-operation.  It would make the Connemara pony even more famous.
Mr. J. Lally, manager, Ireland West, said their work was to supplement local endeavour and so they were very pleased with this development because it could substantially increase local tourism earnings.  Some people thought wrongly that tourism was for big hoteliers only.  They hoped this service would be the forerunner of many.  There had been a lot of talk about the west dying but there was no cause for alarm when people could produce such a professional service as this.
Very Reverend Father Quinn thanked all concerned and paid warm tribute to the local people and the organising committee.
The ponies paraded through the gaily decorated village led by Lord Killanin’s son, Michael, and heralded by a trumpeter from St Patrick’s Band, Galway.  The treks start from Fox’s which was one of the stations for the olden Bianconi coach transport system.
Parties will be provided for on days outside official treks by arrangement beforehand.  Treks will be varied as much as possible away from main roads, some will go through Slievaneena and Pilagh, where one can view the Aran Isalnds, Cliffs of Moher, Galway Bay, Connemara Mountains and the whole of Lough Corrib.“