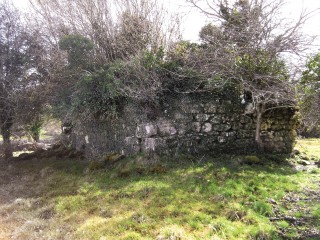 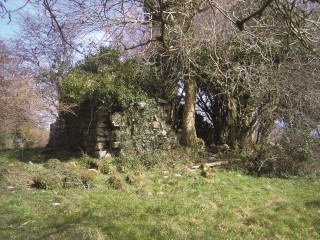 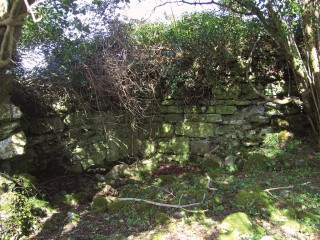 On a rise in undulating ground to the south of Ross Lake at Dovepark (Páirc na gColm – Field of the Doves) stand the remains of a very ruinous church (WNW-ESE; 11.46m L x 6.45m W), indicated as Kilcallin Church, probably medieval in date. No architectural features survive. There are faint traces of a curving scarp to south east, south and west of the church which may indicate the existence of an early ecclesiastical enclosure or ancient fort.

This little church may have been dedicated to St. Caillín, one of the tribe of the Conmaicne which had split up between Connemara in the west and Leitrim/Cavan in the east. This eastern part of the tribe, which became known as the Conmaicne Réin, were apparently converted to Christianity by Saint Callan in 560AD, who founded the monastery of Fenagh in South Leitrim. He would have been acquainted with many of the early Irish saints of which St. Fintan was one and under whom he had studied as a young man. He spent a time evangelising in Scotland and is also said to have visited Rome. Upon his death his remains are said to have been buried in the walls of the ruins of Fenagh Abbey. His feast day is November 13th.

See Dovepark, in A Guide to Lough Corrib’s Early Monastic Sites and also Chapel Island, St. Caillín, in A Guide to Connemara’s Early Christian Sites – both books by Anthony Previté