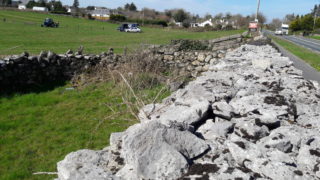 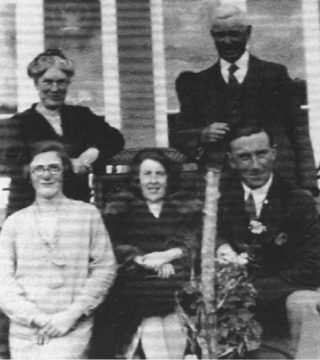 Vaughan Family - Willie Vaughan, his wife Annie and their children Ita, Christina and Gabriel. Willie taught in the old school in Knockbane and moved to Newtown School in 1900, where he taught up to 1926.
Micheál Ó Lionnáin 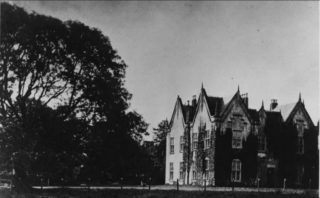 Knockbane House, home of Anthony O'Flaherty MP c1860. The house was built by Anthony in 1839 and demolished in 1900 by the Congested Districts Board.
Rory Noone 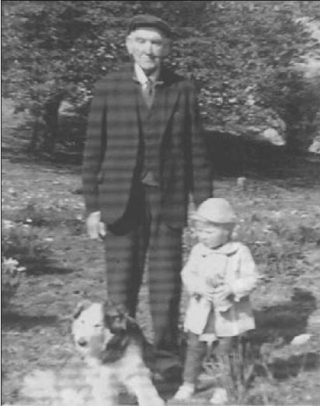 Richard Fitzpatrick with his grandniece Jacinta Noone (Knockbane House)

In 1823, Anthony O’Flaherty, the local landowner, built a school at Knockbane and it was here that children were educated until Newtown School replaced it on 1 July 1900.  The new school inherited, therefore, a tradition of education of almost eighty years standing.  Anthony O’Flaherty, who with his wife Harriet lived at Knockbane House, held positions in county administration, including Chairman of the Galway Board of Guardians.  O’Flaherty, a Repealer, was also elected as a member of Parliament for Galway (1847-57).

We can be sure that the building of the school, as well as giving work locally, was also talked about in the 1820s.  A slated building in the middle of thatched houses, it certainly stood out.  Even the idea of children spending part of their day in school was new.  How did the school change the area?  Did people start to treat each other differently now that some went to school and some (probably most) did not?  Not all could afford the time and there were fees to pay.  Much that we would like to know is, or will be, difficult to trace at this remove.  Luckily though, the surviving documents in the National Archives give important information about Knockbane School over the course of the century.  There is enough to give a fascinating insight into the social history of this area over the last two hundred years.

The school was built of stone, lime and sand.  It measured 30 feet by 18 feet, had a slated roof and was 10 feet high.  The main finding and training agency at the time, the Kildare Place Society, Dublin, gave £50 towards costs and O’Flaherty supplied the rest.  As he was the owner, no rent was required.  By then, the Kildare Place Society had funded almost 1,500 schools, though Catholic leaders came to distrust it.  O’Flaherty broke his connection with it in 1826.

In 1840, Knockbane School joined the national system.  By then the school had been closed for some time and was in need of repair.  Anthony O’Flaherty agreed to give an annual donation to the cost of teaching and to pay for repairs.  It was supposed that the scholars would pay something.  The suggested fee scale was 2 shillings for boys under 10 years of age and 4 shillings for those over 10 years.  Where there were three of the same family, the third was free.  O’Flaherty also agreed to put up the inscription “Knockbane National School”.  He applied for money from the Commissioners to provide a residence for the teacher as well as desks and forms for the school.

struck off before even starting

Originally, the school was for boys only.  O’Flaherty applied to build a separate school for girls, measuring 34’ x 18’ and 10’ high, enough to accommodate 100 children.  In December 1840, the Commissioners of Education sanctioned grants for £66 (including £6 for privies) towards building and £7.10s towards furnishings.  O’Flaherty decided to abandon this project, however, and the funding was cancelled.  Knockbane Female School, roll number 2819, was struck off the rolls before it was even built.  He then tried to get money to build an agricultural school, but this time he was turned down.  So, the story is about what could have been, as much as what actually happened.  Three years later, in 1843, girls began to attend Knockbane.

When Knockbane became a national school in 1840, James Kyne was appointed its first teacher.  He was 22 years old and was paid £8 per year.  He had been educated in the National School, Galway (There was a school in Market Street).  A second room, measuring 6 foot by 18 foot, was built out of the funds received, so he probably lived at the school.  This smaller room seems to have been taken off the main room and was later used as a classroom.  James Kyne taught at Knockbane for fourteen years and when he resigned in March 1854, the school closed down for more than a year.  The closing of schools for short periods was common enough; schools closed if a teacher was ill, or if there was fever in an area or indeed when teachers were sent for training.  The records also indicate that Knockbane closed during the famine years.

School attendance figures reflect the high population of the time.  In 1840, Knockbane was expected to cater for about 120 males, a figure that was expected to rise to 150.  By the end of that year, a reported 135 were in attendance.  The figures for May 1843 show 71 male and 25 female pupils in attendance.  Over the years, the figures fluctuate quite a bit, often overestimating the real number, though one inspector’s report in the late 1860s stated that Knockbane was a well attended school.  Unfortunately, however, we do not have the names of the children.

death of the knockbane landlord

After O’Flaherty’s death in 1866, management of Knockbane School passed to Fr. Kenny, the local parish priest.  Anthony and Harriet O’Flaherty did not have children, and the Knockbane estate passed to his sister’s family, the Fitzpatricks.

For much of the nineteenth century, teachers worked in the national schools without any formal training.  The quality of teaching was uneven and inspectors were often critical of standards.  Monitors (older pupils who taught) sometimes failed school tests.  False bookkeeping was a common charge, as Principal teachers sought to record high attendance figures for funding purposes.  Knockbane had its share of criticism over the decades, though usually for relatively minor transgressions, and the school also got its share of awards for “order and cleanliness”.  After James Kyne resigned in 1854, a number of teachers taught for short periods.  Information is sketchy, but the following list gives us some idea of the names:  Patrick Quinn, Edmond Beston, D. Dunne and D. Hailey.  Monitors included James Conboy, Thomas Walsh, Maria Gavin and B. Holland.

Teaching opened up an important new area of work for women over the course of the century and in 1869, the first woman teacher was appointed in Knockbane.  Mary Walsh was only 17 years old.  She was educated at Newtownsmith Female National School and had worked previously as a monitor in Moycullen.  Patrick Coan was now Principal teacher of Knockbane (on a salary of £15) and M. Toole was senior monitor (on a salary of £5).  Two classrooms were in use.  All three taught in the large room until 2 o’clock when Mary Walsh took charge of the small room from 2 to 3pm.  There were 103 on the rolls (49 female and 54 male) though the average daily attendance was about half of that number.

Later, a Julia Walsh taught at Knockbane for almost 17 years.  In 1890, she was forced to retire, as she was permanently incapacitated from discharging the duties of a national school teacher.  She was only 36 years old.  The conditions that had contributed to the teacher’s ill health were becoming increasingly unbearable.  Over the years there had been complaints about overcrowding, dampness and indeed darkness.  Repairs were carried out to the floors but it was becoming clear that only a new building would solve the problem.  The first call to replace the schoolhouse was made in 1880 by Fr. Kenny, parish priest, but it was difficult to find a site.  A proposed site at Coolaghy did not work out and the Board of Works was not satisfied with another site.  By July 1899, however, the Commissioners of National Education had made a grant of £500 18s 8d to establish a new school and by April 1900 it was reported to be nearing completion.  Lord Killanin, Spiddal, was one of the Commissioners at the time.  The new school had three rooms with measurements as follows:  (a) 48’ x 25’9” x 14’4” (b) & (c) 17’3” x 12’3” x 14’4”.  There was a 61 year lease and the school was to accommodate 200 children.

last out first in

The last group of teachers to work in Knockbane was the first to teach at Newtown.  In October 1890, Miss Ann Griffin was appointed permanent assistant teacher.  She already worked at the school and possibly received most of her training there.  In February 1894, William Vaughan succeeded Martin Griffin as Principal.  William Vaughan and Ann Griffin were to marry and by 1901 (at least) were living at Hawthorn Cottage, Rineen.  In January 1899, Miss Mary J. Vaughan was appointed second assistant teacher.  She was appointed (for one year initially) in view of the overcrowding.  The school had claimed an average attendance of 113 during the previous year though there was space only for 69 pupils.  There was also a monitor, Margaret Barrett, who had taught since 1895.

On 30 June 1900, the three teachers resigned, the school was struck off the rolls and on 1 July 1900, Newtown National School superseded Knockbane.

Until recent times, children walking over to Newtown school (from the Oldtown direction) could still wander in around what was left of the “old schooleen”.  I don’t think that we ever thought about the children who went to school there, we were too young and it was too long before our time.  Yet in our own way, we were following in their footsteps.