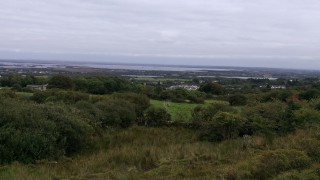 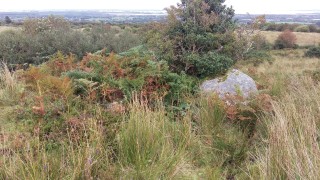 Without knowledge of its existence, one would now pass Leaba Diarmuid, Gortyloughlin, without knowing it lay under this rocky outcrop.
Hazel Morrison 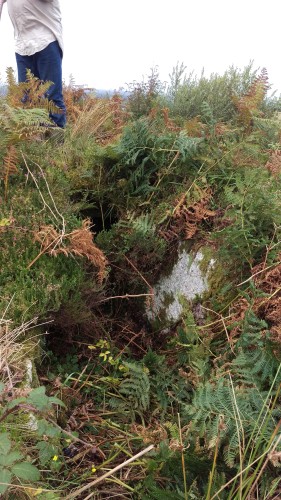 The now overgrown table like structure of Leaba Diarmuid, Gortyloughlin. You can just make out the side stone leading to the very small chamber under the cross lintel.
Hazel Morrison 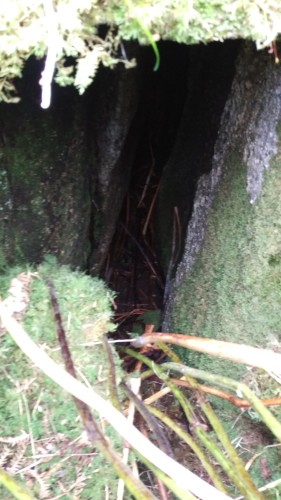 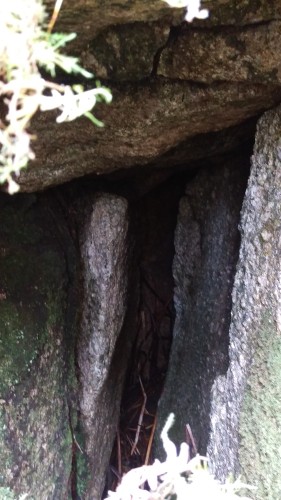 Leaba Diarmuid, Gortyloughlin. This photo shows the stone placings of the small chamber underneath.
Hazel Morrison

Situate on privately owned ground, set into the Gort Uí Lochlainn hill overlooking the village of Moycullen, is a now overgrown megalithic structure referred to by ancestral locals as “Leaba Diarmuid”.  The site now quietly stands grazed by bovine company, but was once passed daily by chirpy schoolchildren from Drimaveg and Drimavohan taking a shortcut across the boggy hill down into old Gortyloughlin village (where they changed from wellington boots to shoes at Clancy’s house) before continuing their walk down the “mountain road” to Moycullen primary school.

listed on the sites and monuments record of ireland

Following a recent request from Moycullen Historical Society for an archaeological description of the site, Olive Alcock of the Archaeological Survey of Ireland (ASI) Team¹ uploaded the following report to their Sites and Monuments Record (SMR) on 11 October 2016:-

On the N downslope of a low hill in an area of peaty poorly drained land. This stone structure (L 3.6m), which is roughly trapezoidal in plan, varies in width from 0.2m at its NNW end to 1m at its SSE end and it decreases in height from NNW (H 1m) to SSE (H 0.6m). The sides are defined by boulders. The NNW end (L 1.8m) is roofed with four lintels that are now covered with a layer of peat. The SSE is open and both sides are defined by a single large boulder; that on W side is 1.8m long, while that on E side is 2.3m long. The boulders defining the sides of the structure appear to be naturally occurring split boulders. However, the area at the NNW end was recognised as a potential chamber and was consequently roofed. Its precise function (shelter, storage, burial) is unclear, as is its date”.

Ireland is bestrewn with similar monuments with variations of the same name – more well known ones stand in the village of Corrúch on Inis Mór and in the Burren, Co. Clare.  Traditionally known as Leaba Dhiarmada agus Gráinne – the bed of Diarmaid and Gráinne – the name is a reference to the young couple, who mythology tells us, slept at these sites on their journey around Ireland.

Brendan Patrick Keane of Irish Central wrote that one of the most beautiful genres of ancient Irish literature was the story of runaway lovers Diarmuid agus Gráinne. The classic Irish story tells of a princess that gives up the comfortable life as a king’s wife, to be with her true lover. The lovers are hunted for they have betrayed dharma or social duty–such as that of the betrothed to her king, or that of the best soldier to his lord. The lovers would rather be hunted and have a terrifying existence in the wilderness, with only their love to keep them alive, than to be with anyone else than each other, even if it means betraying the king and all society.  Chased like animals, by the king they have betrayed to be together, these megalithic sites are testimonials to the lovers that break all conventions and laws to be.

Brendan Keane further goes on to mention that In later traditions, the leaba or megalithic “Diarmuid agus Gráinne beds” were places where young lovers would copulate, and so were scandalously avoided by polite society.

So if Diarmuid and Gráinne were in Moycullen, they certainly picked a “room with a view”!

¹  The Archaeological Survey of Ireland (ASI) is a unit of the National Monuments Service. The ASI was established to compile an inventory of the known archaeological monuments in the State. The information is stored on a database and in a series of paper files that collectively form the ASI Sites and Monuments Record (SMR)