You are here: Home>people>Abbott Family at Homefarm 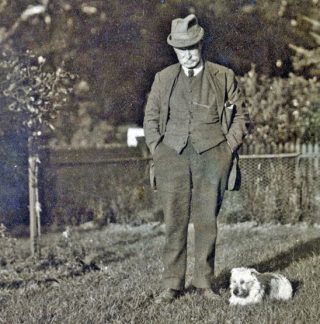 Richard Abbott on his 66th birthday, 26 December 1926, in the garden of his house, Torlundy, near Fort William Scotland
Susan Abbott 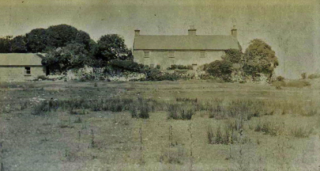 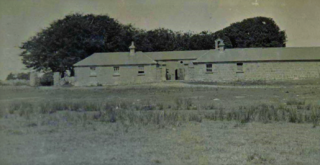 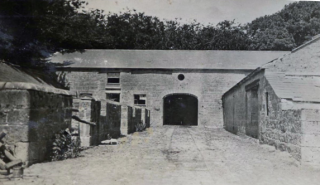 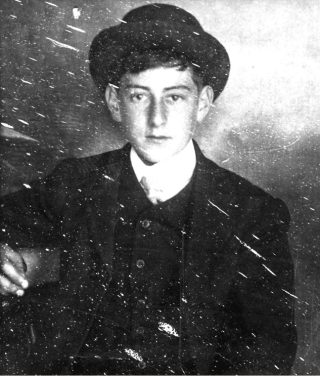 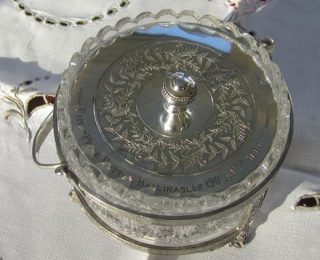 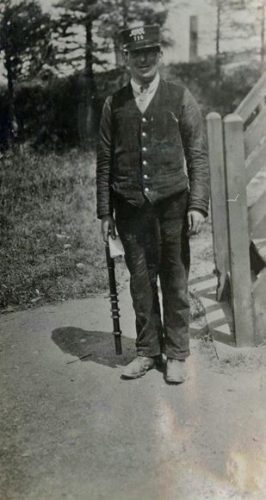 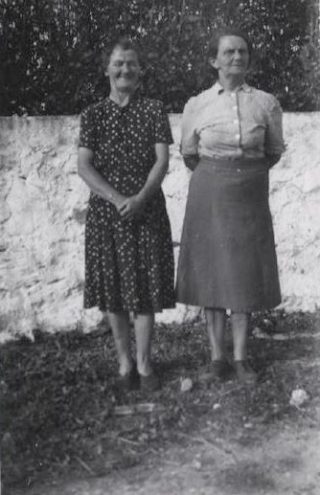 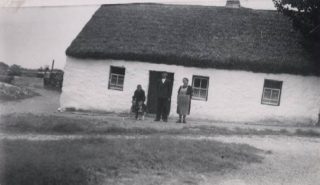 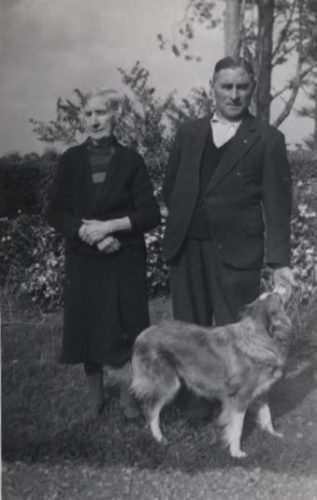 Miss O'Connor and John her nephew taken at her home at Moycullen. John accommodated Norman throughout his second visit
Susan Abbott 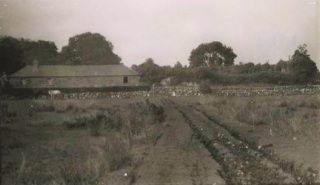 It is not now as it hath been yore, Norman Abbott's comment on Moycullen Lodge September 1949
Susan Abbott 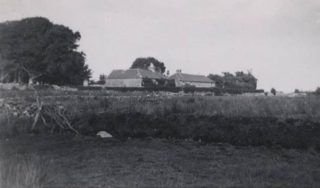 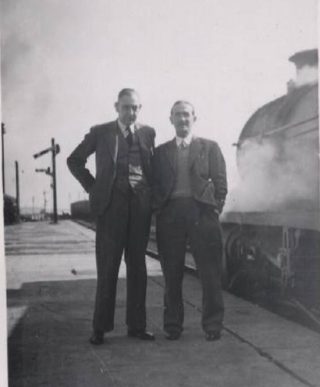 W Norman Abbott and Dr Frank L Lydon at Galway Station on Friday 23 September, 1949, about to board the train for Dublin and their return to London
Susan Abbott

It was completely by chance that the family of Richard Abbott came to be living in Moycullen between 1904 and 1924. Their only previous connection with Ireland was through his maternal grandparents, Robert and Mary Carmichael, who had emigrated from Dundalk to Lancashire in 1825 to work in the cotton mills there. They were descendants of the planters from Scotland and were Presbyterians. Richard might have heard stories about Ireland from his grandmother or from his aunt Margaret when he was a child, but his grandmother died when he was nine and Margaret had only been six years old when she left Dundalk.

Richard Abbott was born on 25 Dec 1860 in Turpin Green, Leyland, Lancashire and was baptized on 10 Apr 1861 in Turpin Green Wesleyan Methodist Chapel, where his parents had been married.

Somewhere between 1903 and 1906 Richard was appointed the Steward for the Moycullen estate of a relative of Lady Tollemache Scott, for whom he had worked at Bosworth. This was Captain the Hon. John B Campbell, son of Lord Stratheden.  Richard, his wife and son, William Norman Abbott (1897-1952), moved to Ireland and are in the 1911 census at Moycullen, where he is listed as the Farm Steward and living at Moycullen Lodge.

Richard’s scrapbook suggests that life in Ireland was relatively peaceful for him and his family up until the beginning of World War I. He apparently got on well with both his employer and with the estate’s tenant farmers. His son, W Norman Abbott, attended the National School in Moycullen and then went on to the Erasmus Smith Grammar School in Galway City. Louise, Richard’s wife, won first prize for her butter at Ballinasloe in 1908, a glass butter (or jam) dish in an EPNS holder with a silver inscribed lid.

A newspaper report in Richard’s scrapbook tells us that on Thursday 7 November 1907 a ploughing match was held for the first time at the Home Farm, Moycullen, organised “by Mr Richard Abbott, who from the inception of the idea of the match worked unceasingly, and much of the day’s success is due to his efforts.”

Richard was considered to be an expert on farming on the type of soil that was found in Galway because of its similarity to conditions in the Lancashire ‘Mosses’ or boggy areas such as those west of Leyland. An article in the newspaper Irish Farmer (or Irish Farmer’s Gazette/Journal) in about 1912 praised the improvements made to the Moycullen estate, which had enabled greatly increased production on about 50 acres of wheat, barley oats, turnips, mangels and potatoes. Richard purchased a Shorthorn bull from Lancashire in order to develop the estate’s herd of Shorthorn cattle. A flock of Cheviot sheep was introduced. They also bred good quality horses for hunting.

Tragedy struck when Captain Campbell was killed in France in 1915 and his eldest son Donald was killed a year later. Norman, who had enrolled in 1913 at University College Galway to study engineering, had tried to enlist in the army in 1914, but was rejected as he was too young. In 1917 he was appointed 2nd Lieutenant in the Connaught Rangers and went to France on attachment to the Royal Irish Regiment. He was wounded and captured in March 1918 during the first day of the Ludendorf Offensive, which struck the unfortunate 16th Irish Division. During this battle near Lempire his school friend and fellow 2nd Lieutenant, Michael V McKiernan, was also wounded. Michael V sadly died of his wounds and is buried in France. Norman spent the rest of the war in a prisoner of war camp in northern Germany and returned to Ireland in 1919 to continue his engineering studies at University College Galway.

The political situation in Ireland became more difficult. There were signs of the increasing frustration of the Irish nationalists at the lack of progress on their demands for home rule. This can already be seen in some responses to the 1911 census. Some households which had participated in the 1901 census giving their names with the English spelling, now declined to give any information to the enumerators. Their names were given in Irish, but they refused to answer the Irish Language question (a similar refusal to take part in the census in 1911 was used by many women in England to register their protest at being denied the vote).

In 1915 there were Sinn Fein disturbances in Moycullen itself, which were dispersed by the Royal Irish Constabulary. In 1916 some British troops were billeted on the Church Field in Moycullen. There was a dispute between the tenant farmers of the Campbell estate and the troops. Richard managed to settle this dispute and received a letter of thanks from the Colonel in Galway on 30 June 1917 and another from the officer in charge of the troops when they were withdrawn in August 1917.

After World War I the violence increased and anyone who appeared to represent or support the English rulers suffered. This happened to many people in Galway and Moycullen and Richard Abbott and his family were not the only ones. On 19 December 1919 armed and masked men threatened him at home. Clearly they were looking for weapons. Some property was stolen, including an officer’s sword (which presumably belonged to Norman). In March 1920 Richard received a threatening letter ordering him to leave Ireland. Armed men raided Moycullen Lodge again in July 1920, and notices were posted in Moycullen village saying that he would be shot. He moved his family out of the farm and into Galway City, but attacks continued in 1921. They lived in Montpellier Terrace and then Norman villas. In Montpellier Terrace the house was raided by the British Crown Forces (the Black and Tans), who were apparently searching for a young man they thought was hiding there. They were mistaken, but they took Richard outside and threatened him anyway.

A report in the Connacht Tribune of 28 January 1922 of Galway Quarter Sessions states that “Lady Stratheden Campbell (widow of Captain Campbell) was awarded £110 for the burning of her house at Moycullen. Richard Abbott, agent for the same applicant, was awarded £180 for destruction of furniture and £7.7s expenses.”

Richard put in a claim dated 14 August 1923 for compensation of £500 to the Compensation (Personal Injuries) Committee and another claim for loss of salary during the time he had to live in Galway City away from the farm at Moycullen. He finally left Ireland in 1924 and moved to Scotland, near FortWilliam. He never forgot his treatment at the hands of the IRA and slept with a shotgun beside his bed for the rest of his life.

William Norman Abbott returned to UCG after World War I to continue his engineering studies. He was not able to obtain a degree as he had not passed the required qualification in the Irish Language. He does not seem to have made any attempt to learn it, although his school friend Michael V McKiernan had been a member of the Gaelic League (Connradh na Gaeilge).

Norman spent the 1920s having a good time with his friends in Galway City, no doubt doing his best to ignore the unpleasantness being suffered by his father. Both Norman and the McKiernan brothers who studied at UCG were contemporaries there of the author Frances Moffett. She describes the atmosphere of unease in Galway City up to 1924 in her book “I also am of Ireland”, when lectures could be interrupted by soldiers or people stopped at random in the street or raided in their own homes.

In 1924 Norman left Ireland also and joined his parents in Scotland. He got a job working for Balfour Beatty on the Lochaber Water Power Scheme near FortWilliam. In the 1930s, after a spell of unemployment during the depression, he was taken on by the British Ministry of Works. He worked as a factory inspector and remained in the civil service until the end of his life in London.

Norman retained many happy memories of his youthful years in Moycullen and Galway, and never displayed any resentment towards the Nationalists who had helped to drive his parents back to the United Kingdom. He remained close friends with Dr Frank Lydon of Galway, and in 1948 he fulfilled a long-held dream by going back with him to Galway City and Moycullen. Norman stayed with John McDonagh at Moycullen. He took a number of photographs of old friends and the places he knew.

Norman had been gassed in World War I. In the early 1940s during his inspection of a munitions factory there was another escape of gas. As a result of this he developed emphysema. Commuting to and from his office in London became increasingly difficult. He collapsed and died at home in Streatham on 25 February 1952.

All notes in this article are based on the following sources: