You are here: Home>people>The Surnames of Moycullen

The Surnames of Moycullen 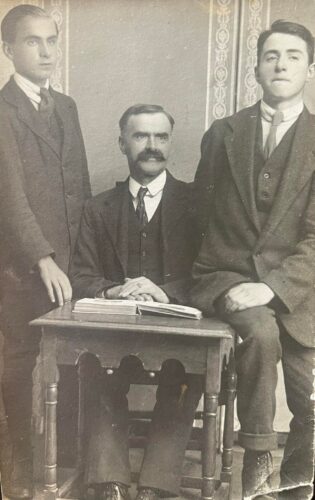 This is the first in a series on the Surnames of Moycullen. In due course the series will also include Moycullen surnames from the 1901 and 1911 Censuses that were not covered in Clancy’s original work as well as extinct surnames that were recorded in Blake’s Census but are no longer found in Moycullen and environs.

This is an English surname. It has been in Ireland since the early 15th century. The County Wicklow family settled here in the mid 17th century. The name is now scattered throughout the country. The name was not found in Blake’s Census but Actons were recorded in Griffiths Valuation in the 1850s in Coolagh(Coolaghy) and Knockanranny, Moycullen and Doon in Killannin Parish. By the turn of the 20th century Actons were found in Park and Doon, Killannin and in Knockanranny, Moycullen according to the 1901 and 1911 Censuses.

This English name was established in County Down by the mid 16th century. Since the 18th century it is to be found in parts of Connemara. Blake’s Census had Audleys in Coolagh (Coolaghy) but Griffiths Valuation and 1901/1911 census show the surname only in Park, Killannin Parish.  Variations of the surname spelling,  Auddley and Addley show a family in Knockaunranny in 1901 and 1911, this would have been the line showing in Coolaghy during Blake’s Census.

This surname is common in Counties Galway and Clare. At the time of Blake’s Census it was found in multiple townlands including Moycullen, Oghery (Oldtown), Newtown, Killagoola, Knockbane, Drimcong, Drimmavohaun and Gortyloughlin.  It is formed from the Irish adjective Bán (white).  In emigrating to America the name was sometimes translated as Bean and even White.

According to McLysaght these Barrett families were branches of the same stock and came with the Anglo Norman invasion. However, Woulfe believed they were distinct and unrelated: the Munster Barretts, centered in County Cork, being of Anglo-Norman stock and the Connacht Barretts of County Mayo, having Anglo-Saxon origins. Frank Clancy in his original work stated that the Moycullen Barretts were most likely of the Mayo stock. However, both families may have been represented locally: the Cloonmore and Larragan Barretts, for example, have a history of naming men in their family Edmund, Richard, Nicholas and Peter, all traditionally Anglo-Norman Christian names. Blake’s Census and Griffiths Valuation found Barretts located throughout Moycullen. By the time of the 1901 and 1911 Census,  Barretts were recorded in Ballydotia, Cloonabinnia, Drimmavohaun, Knockanranny, Slieveaneena, Moycullen and Cloonmore and Larragan, in Killannin.

There are four septs of this name. It is spelt Bohan in Counties Galway and Leitrim, Bohane in Co. Cork, and Bohannon in Co. Clare. In Moycullen, the name has long been associated with the townlands of Curra and Tumnasrah. Blake’s Census had for Curra one Thomas Boughan and later a Thomas Bohan was recorded for the same townland in Griffiths Valuation. The Curra and Tumnasrah Bohans were found in the 1901 and 1911 Censuses and continue to live in those townlands.

This is one of the most important and widespread Anglo Norman names in Ireland. First identified with Galway and Mayo, it is now found in all provinces , although Ulster has the smallest number. This was by far the most powerful family, and biggest landlords in Counties Galway, Mayo, Limerick and Tipperary.

At the time of Blake’s Census Burkes were found in Chapel Environs, Drimmavohaun, Drimcong and Moycullen townland.

Moycullen landlord, George Burke of Danesfield House, was a descendant of the original Anglo Norman invaders, the DeBurgos and was the only Moycullen Burke listed in Griffiths Valuation. The 1901 and 1911 Censuses found Burkes in Moycullen, Ballydotia and Clooniff.

A common English name, Carr has been in Ireland since the 16th century. The Moycullen Carrs were originally MacCarra and are recorded as such in Blake’s Census in the townlands of Clydagh, Lissaguraun, and Poulnaclough. By the time of Griffiths Valuation in the 1850s the name MacCarra had fallen out of use and the name Carr was being recorded in Slieveneena and in Uggool (Killannin). Similarly, only the name Carr is found in Moycullen parish records from the 1840s on. As enumerated in the 1901 and 1911 Censuses Moycullen Carrs were resident in Oghery (Oldtown), Slieveaneena and Cartoor.

This common English name has been in Ireland since the 14th century. In some cases it is believed to be a derivation of MacArthur, a name of Scottish origin. Carters were recorded in Blake’s Census in Clydagh and Lissagurraun and additionally in Griffiths Valuation in Aubwee, Moycullen. By the 1901 and 1911 Censuses Carter families resided in Clooniff, Lissaguraun, Pillagh, Ballydotia and Cloonabinnia. Carters also have a long association with the Killannin townlands of Burnthouse, Kylemore, Laghtgannon, Park, Pollagh, and Larragan.

Although the name of a very prominent English settler family in Ulster, the Moycullen Caulfields were originally O’Gamhnain, a branch of the Siol Muiredaigh of Ui Briuin Ai that also gave rise to the O’Conor Don. According to researcher Chris Jacques, the O’Gamhnain became widely scattered in Roscommon, Galway, Mayo, Clare and Limerick. The name was variously anglicized to Gownane, Gawnaine, Goonan, Goonane, Gaunane, Gunning, and several other variations. In Moycullen the name was recorded in Blake’s Census as Gaunane in the townlands of Ballynahallia and Knockaunranny.

In far northwest Mayo and the southeast corner of Galway and northeast corner of Clare, the name Goonan or Goonane persisted, but over much of the region including Galway and West Mayo, it was further anglicized to Caulfield before the Great Famine of the 1840s. Griffiths Valuation recorded Moycullen Caulfields in Portdarragh, Shannagurraun and Polleha (Pillagh). Caulfields were still resident in Portdarragh, Pillagh and also in Kylebroghlan at the time of the 1901 and 1911 Censuses.