Artist notable for works of art in Catholic Churches 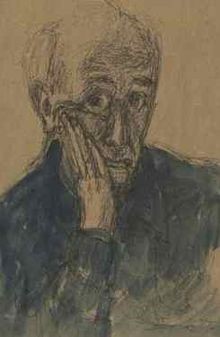 Adam Kossowski was born in Poland in 1905. From 1946 he devoted himself entirely to religious art. In 1949 he was invited to do ceramics and paintings for the Carmelites of Aylesford in Kent, England, and since that time made ceramics his special medium.

his link to moycullen

What is his connection with Moycullen? Amongst Mr. Kossowski’s works are the Stations of the Cross in Moycullen Church which was blessed in December 1953.

Of the Moycullen Stations, Mr. Kossowski has written “These are comparatively small in size but I consider them important among my works as in this case I have finally decided to limit the number of colours to three only and, using strong blacks as a unifying element, give some measure of monumentality to a work of small size. This has been a new and important experience for me”.

Former Moycullen parish priest, Father V. P. Fitzgerald, said of them: “They have a very general appeal young and old, critics and others, all like them”.

When Germany invaded Poland in September 1939 Kossowski went east where he was arrested by invading Russian troops two months later. Adam Kossowski (1905 to 1986) was first imprisoned at Skole and then at Kharkov, both in present Ukraine. He got 5 years hard labour and finished up in part of the Gulag which was called Peczlaz near the Polar Sea.

He arrived in England 1943 and in 1944 he joined the Guild of Catholic Artists and Craftsmen. His work is to be seen in Cardiff Cathedral, Downside Abbey, and Tympanum at Saint Mary’s RC Parish Church, Leyland, and Ceramics at the Chapel of St Aloysius RC Church, Camden, London and The Friars in Aylesford all in England.