You are here: Home>people>The Surnames of Moycullen (Part 2)

The Surnames of Moycullen (Part 2) 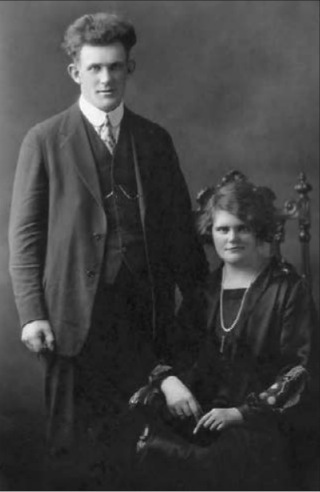 Tom and Bridget King, Knockalough. King and Conroy were both derived from the Irish Mac Conraoi
Courtesy of Jimmy J. Walsh

This is the second in a series on the Surnames of Moycullen. Initially, the surnames presented here are those that were in Clancy’s original work. In due course, additional names prominent in Moycullen as well as extinct surnames recorded in Blake’s Census will be included.

There are two septs of this name. One was an ancient family of Rosclogher, County Leitrim. The Moycullen Clancys are descended from the other, a Thomond sept which was a branch of the MacNamaras and were the hereditary brehons or judges to the O’Briens. Clancys are now widespread throughout Counties Limerick, Tipperary, Waterford and Galway.

The Moycullen Clancys were transplanted here from Thomond in 1693 and by the time of Blake’s Census they were widespread in Moycullen in the townlands of Drimmavohaun, Killagoola, Knockaunranny, Newtown, Oldtown, and the Mountains. Later they were also recorded in Griffiths Valuation in Poulnaclough, Drummaveg, Leagaun, and Polleha. By the 1911 Census Clancys were additionally resident in Lissaguraun and Gortyloughlin.

This name is spread throughout the four provinces, spelt Connelly in County Galway generally but most commonly in Moycullen spelled Conneely. The origins of the Moycullen families are unknown but it is probable they are either a branch of the Ui Maine as are most Connellys in County Galway or are of a Dalcassian family in Thomond who were said to be descended from Mahon, brother of Brian Boru. The Conneelys were well represented in Blake’s Census in the townlands of Knockshanbally, Cloonabinnia, Gortachalla, Killagoola, Knockaunranny, Poulnaclough, Tumnasrah and the Mountains. By 1911 Conneelys were recorded in Kylebroghlan, Poulnaclough, Ballydotia, Ballynahallia, Cloonabinnia, Knock, Finisklin and Uggool. The 1911 Census recorded both Conneelys and Connollys in Gortachalla and Cartoor.

This is one of the oldest surnames in the area. Most of the historical Barony of Moycullen was an ancient tuath known as Delbhna Tir Dha Locha (the Delbhna being an ancient people who inhabited the area between Lough Corrib and Galway Bay.) The chiefs of this area eventually adopted the surname Mac Conraoi, sometimes anglicized to Conroy. Later the name, according to Woulfe, was mistranslated to King, owing to the Irish form of Mac an Roig, “son of the king”. Today the surname King remains prominent in Connemara.

There are three distinct origins for the name Cooke in Ireland. In Leinster it is mainly an English occupational name, long established there. In Ulster it is MacCook or MacCuagh, a branch of the MacDonald clan of Kintyre in Scotland. In Connacht Cooke is the anglicised form of MacDhabhoc (also called MacUag), the name of a branch of the Burkes or DeBurgos. The MacUags of Co. Galway were first named McHugo after Hugo Burke.

In Moycullen this surname was first recorded in Blake’s Census as MacHugo and was found in Clydagh, Killagoola, Kylebroghlan, Tullokyne, the Mountains and Uggool. Parish records through the 1820s registering the surname as MacHugo but in the 1830s it started to be recorded as Cooke or MacCooke. Griffiths Valuation recorded only one tenant with the surname, a MacCooke in Uggool during the 1850s.  By 1911 Cooke families were recorded in Uggool, Kylebroghlan, and Poulnaclough.

This name, rare in Moycullen, originates in Counties Tipperary and Kilkenny from at least the 13th Century and is of Anglo/Norman origin. Croke has also been in Limerick since the 17th century. Its origin is Le Crocker (maker of pots).

Patrick (Paddy) Croke was the first of the surname to come to Moycullen, in the 1940s, with his young family from Henry Street Galway.  He was a foreman for the old concrete pipe factory that was situate adjacent to old railway station in Cloughane townland.  They remain the only Croke line in Moycullen.

This surname is probably from Cuileann, the name of several distinct families that were located in Counties Galway, Tyrone, Tipperary and Cork. The Moycullen family of Cullinanes descend from RIC Constable Andrew Cullinane who was assigned to the village in the late 19th century and married into the Walsh family of Ballyquirke. His family originally came from County Clare and were believed to be related to the Corca Laoidhe branch of the Cuileann from south-west County Cork. An unrelated family of Cullinanes also lived for generations in Ower, Killannin and may have been of the Galway Cuileanns who were a branch of the Ui Maine.

The name of Scottish settlers who came to Ireland with the Ulster plantation. There are a few lines of Cunninghams in Moycullen. As there were no Cunninghams in the village as of the 1911 Census, all are relatively recent arrivals.  The first line to come here was Joe Cunningham who was a nephew of Pat Fox of Foxes bar.  He came from Slievefin between Annaghadown and Claregalway in the 1930s. The Gortachalla Cunninghams are from Galway City and the Kylebroughlan Cunninghams are of a Kilkee County Clare line.