You are here: Home>people>The Surnames of Moycullen (Part 3)

The Surnames of Moycullen (Part 3) 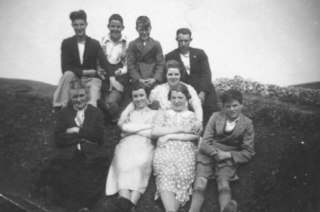 This is the third in a series on the Surnames of Moycullen. Initially, the surnames presented here are those that were in Clancy’s original work. In due course, additional names prominent in Moycullen as well as extinct surnames recorded in Blake’s Census will be included.

This name was found primarily in Counties Galway and Leitrim in the 16th and 17th centuries where the Currans were mostly of Madden stock. In the present day they are scattered throughout the country but are most numerous in Galway and to a lesser extent in Counties Waterford, Tipperary, Kerry and Donegal.

The Currans are long established within the boundaries of the historical Barony of Moycullen. In Blake’s Census they are listed as Curreens living in the undifferentiated townlands that comprised “the Mountains”. Griffiths Valuation shows Currans as tenants in Derrylaughaun and Spiddal West, both of which are officially part of the civil parish of Moycullen. In the 1911 Census Currans were still resident in those areas, specifically the townlands of Spiddal West, Lippa and Park.

There are two distinct families of Darcys in Ireland. One is of Norman origin according to Woulfe, founded by Sir John D’Arcy who in the 14th century received large land grants in County Meath. Over centuries that family branched out across Leinster.

The Moycullen Davorens are of a Dalcassian sept numerous in north County Clare. Among the early Davorens to migrate to Moycullen was Murtagh Davoren who died in 1800 in Ballynahallia. He was recorded there in Blake’s Census along with his brothers Hugh and Michael.

By the time of Griffith’s Valuation, Davorens were listed in Leagaun, the townland of Moycullen and in Ballynahallia. By the 1911 Census Davorens could be found in Kylebroghlan, Tooreeny in addition to Leagaun and Ballynahallia. Other branches of the family were found near Spiddal and in the vicinity of Rosscahill.

Devany/Divinny is the name of several unrelated Irish families.  Like most names beginning with “Div” it is derived from dubh (black). For the O’Duibeannaig, originally from County Down,  it is believed that the second part, Eanaigh, is a place name.  The Moycullen Devaneys are likely from O’ Dubain who, according to Woulfe, are an old and well represented family in Connemara and in County Mayo. No Devanys were recorded either in Blake’s Census or in Griffiths Valuation for Moycullen.  The first Devanys appearing in the baptismal records for Moycullen parish were in the 1850s and 1860s, the children of either Matthew or James Devany, both of Killagoola. By the 1901 and 1911 Censuses there were only two Devany families in Moycullen, one in Killagoola and the other in Knockranny.

Translated as descendents of “black-lad”, this is the name of two different families originating in south  County Galway. According to Woulfe, one family were chiefs of Cinel Cinnghamhna, near Kinvara in the southwest of Galway and the other a family of Siol Anmchadha in the southeast. Divillys were found in Blake’s Census in Killagoola, the Mountains (Finisklin, according to Moycullen baptismal records) and Pollnaclogh. Though not recorded in Blakes, baptism and marriage records do show Divillys resident in Clooniff during the period from the 1780s to 1810s. A Joseph Devely was noted in Newtown in Griffiths Valuation but by the early 20th century censuses no Divillys were present in Moycullen.

This is one of the most widespread names in the Midlands which was formerly called O’Doyne and who were lords of Iregan (Laois). The Moycullen Dunnes, centered in Knockaunranny, were originally recorded as Dunneens in both Blake’s Census and in the early parish baptismal and marriage registers. Thus, they could also have been O’Duinnin who were, according to Woulfe, a literary family of Corca Laoighdhe in south-west County Cork. Both names are diminutives of Donn or “brown” in English. After emigrating to America the name was sometimes anglicized as Brown.

By the mid-nineteenth century, the name Dunne was being used in place of Dunneen in written records and extended Dunne families were found recorded in Griffith’s Valuation and the parish registers in Knockaunranny and Coolagh. Dunnes were still present in Knockaunranny and Knockbane as of the 1911 Census.

There are two septs of this name, the Feeneys of County Sligo (O’Fiannaidhe) and the Feenys of Ballyfeeny in County Roscommon (O’Fidne). The Moycullen Feeneys are thought by some to be of the County Roscommon sept although Woulfe suggests O’Fidne was a longstanding Galway family and the name was recorded here as early as the 17th century by the scribe and genealogist Duald MacFirbis.

The earliest Moycullen Feeneys were documented in Blake’s Census and the early parish records as residents of Gortyloughlin and the nearby townland of Drimmavohaun. Griffiths Valuation had Feeneys in Gortyloughlin, Cartoor and Killough. By the 1911 Census the only remaining Feeneys in Moycullen proper were those living in Gortyloughlin.