The Life of Roderic O'Flaherty 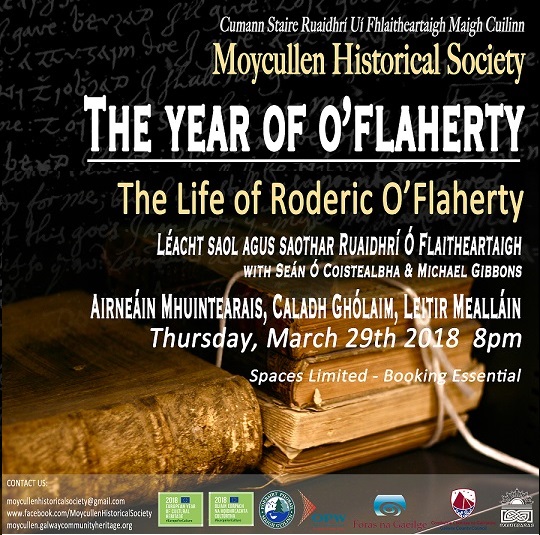 The Life of Roderic O’Flaherty

Tea and refreshments will be served at the interval.

We are delighted to have secured two excellent speakers to present this joint bi-lingual presentation.

Seán Ó Coistealbha will talk about Ó Flaitheartaigh the man, the folklore and in the context of the village of An Pairc, An Spidéal.

This will be followed by Michael Gibbons covering Roderic O’Flaherty within the renowned Ó Flaitheartaigh tribe.

Michael is one of Ireland’s leading field archaeologists. Born and raised in Clifden, Connemara where he still lives with his family, Michael is a graduate of University College Galway with a degree in History and Archaeology. He is a member of the Institute of Archaeologists of Ireland with thirty years of experience as an archaeologist and completed a 5 year term on the Archaeology Committee of the Heritage Council. He has worked with the Department of Antiquities in Jerusalem and for the Museum of London City Excavation Programme.

In Ireland, he worked on the Donegal Archaeological Survey and Galway Archaeological Survey before being appointed as co-director of the National Sites and Monuments Record, Office of Public Works for a period of ten years. He has directed surveys and excavations on Croagh Patrick and has mapped the uplands and islands of the Connacht Coast. He is currently serving a term with Comhairle Bhéaloideas Éireann – The Folklore of Ireland Council.

Seán Ó Coistealbha has been Principal Officer of Muintearas from 1996. He has spent thirty-two years working with Muintearas, where he started working as Youth Manager in 1985. He has considerable experience in community development, education and the Irish language. He has published two poetry books, Stadhan in 2012 and Dídean in 2002. He has been closely involved in Irish language theatre since 1980, taking many parts in plays with the
Taibhdhearc and Aisteoirí an Spidéil.

Seán is closely associated with Diaspora projects and he has done much for Irish speakers in the New England states in America and in the Maritime provinces of Canada. He spent a period as Chairperson of Comhlacht Forbartha an Spidéil, as a director of Taibhdhearc na Gaillimhe, and he is at present a member of Galway LCDC.