You are here: Home>events>Event Archive>Re-visiting the Winter Solstice phenomenon at Newgrange - from False Lintel to World Heritage Icon

Click here to Book your free place via Eventbrite

Basis of the talk

First mentioned by George Petrie and originally known as the “False Lintel”, the feature now known as the Newgrange “roof-box” was subject to numerous antiquarian diggings and interventions throughout the nineteenth century, before being transformed by Prof O’Kelly in the 1960s into the world famous roof-box that we know today.
Except for Stout and Stout, Meehan and, more recently Williams, there has been little rigorous analysis of the development of the feature or of its stratigraphic relationship to the passage and the rest of the mound. In recent years, there has been a growing awareness of the importance of authenticity-analysis in monument research. This involves documenting the history of interventions on World Heritage sites, both at home and abroad.
The talk is based on new documentary research and assisted by the availability of Lidar data drawn from the 3D Icons project as well as previously-unpublished historic photography. The re-evaluation of the authenticity of the roof box and mound was done in accordance with the principles laid out in the “Brú na Bóinne Research Framework” and in recent ICOMOS work on Archaeo–Astronomy and World Heritage sites. 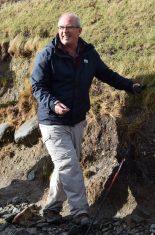 Michael Gibbons is one of Ireland’s leading field archaeologists. Born and raised in Clifden, Connemara where he still lives with his family, Michael is a graduate of University College Galway with a degree in History and Archaeology. He is a member of the Institute of Archaeologists of Ireland with thirty years of experience as an archaeologist and completed a 5 year term on the Archaeology Committee of the Heritage Council. He has worked with the Department of Antiquities in Jerusalem and for the Museum of London City Excavation Programme.

In Ireland, he worked on the Donegal Archaeological Survey and Galway Archaeological Survey before being appointed as co-director of the National Sites and Monuments Record, Office of Public Works for a period of ten years. He has directed surveys and excavations on Croagh Patrick and has mapped the uplands and islands of the Connacht Coast. He is currently serving a term with Comhairle Bhéaloideas Éireann – The Folklore of Ireland Council.

He currently works in heritage tourism, specializing in academic and cultural tourism to the Boyne Valley and the West of Ireland. Michael has extensive experience guiding groups both at home and abroad. As well as Ireland, he has led groups in the Sinai Peninsula, SW Turkey, Peru, the Outer Hebrides and has guided for some of the leading international cultural and activity tourism companies including Butterfield and Robinson and Martin Randall Travel. He remains an archaeologist in private practice, and makes regular contributions to archaeological and historical conferences in Ireland as well as delivering lectures to local archaeological and historical societies and contributing to archaeological and maritime programmes on local and national radio.

Michael is a member of the Nautical Archaeology Society and his current research interests include the archaeology of Irish uplands and islands, in particular the maritime pilgrimage tradition. He has carried out detailed research on some of the most important of these including Skellig Michael World Heritage Site, St MacDara’s Island and Caher Island. Recent archaeological work has included mapping the intertidal zone of the Galway and North-Burren Coast with a particular focus on the prehistoric midden complexes, vernacular quays, harbours and seaweed farms.