O'Flaherty Tour and Talk at Aughnanure 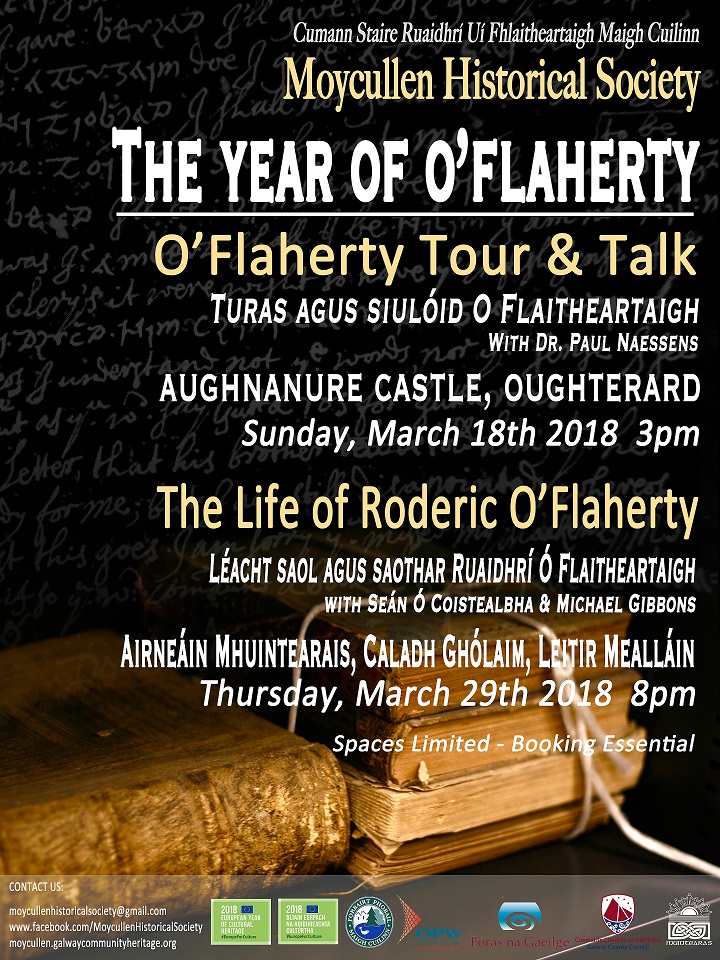 Aughnanure Castle was once the seat of the O’Flaherty chiefs and is Connemara’s only surviving intact medieval castle. The story of this family is deeply entwined with that of the tower house at Aughnanure, one of many O’Flaherty strongholds in the spectacular but impenetrable terrain of medieval Connemara. Built in c.1500, the castle stands today as a testament to the O’Flaherty’s building legacy and remains as the most visible surviving physical expression of late medieval cultural activity in Connemara. The O’Flaherty’s had been expelled from their ancestral lands of Maigh Seóla on the eastern shores of Lough Corrib by the Norman family of De Burgos in the thirteenth century and fled to Iar chonnacht where they ruled for almost four centuries. Here the O’Flaherty world flourished, a refuge of ancient customs and traditions virtually cut off from the rest of Ireland by Lough Corrib and Killary Harbour. They ruled supreme as Gaelic warrior lords and by the sixteenth century they had built a network of small castles or tower houses along the Atlantic coastline and further east towards Lough Corrib from where they ran their prosperous Gaelic kingdom, far out of the reach of English law. The O’Flaherty’s remained at Aughnanure until the seventeenth century and although they retained their ancient ways, they had lost their power and having been active in the Rebellion of 1641, their lands were confiscated, their territories parcelled out and the era of O’Flaherty rule in Connemara came to an abrupt end. Today, the castle is in good repair and gives one an insight into life as it may have been lived in the sixteenth and seventeenth centuries.

Dr Paul Naessens studied Archaeology and History as an undergrad at NUI Galway and the University of Glasgow graduating with a BA International degree in 2003. He followed this with a PhD study of the O’Flaherty medieval lordship of Iar Chonnacht which was completed at NUI Galway in 2009.
He currently works as a part-time lecturer in NUI Galway specialising in medieval Gaelic settlement, the archaeology of the Irish church and technical innovations in land survey. He is the director of Western Aerial Survey, a drone survey company working within archaeology and also serving civil engineering projects. Paul has published widely on the topics of Gaelic Irish medieval settlement and on castles and fortification in Ireland.